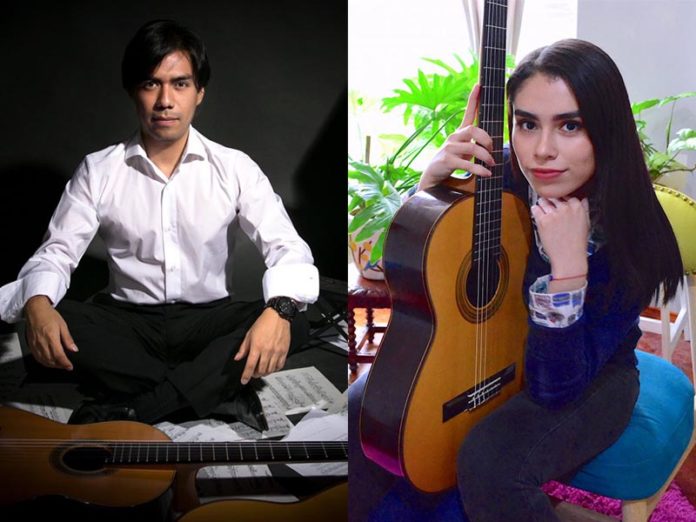 (Art of the guitar DVAC)

Art of the guitar DVAC

Diamond Valley Arts Council (DVAC), Saturday, hosted, “The Art of Guitar in Mexico,” featuring Guitarists Pamela Arellano and Jesus Serrano. The free concert was part of DVAC’s, “Culture Series,” and yet another example of fulfilling their motto, “Advancing the Arts–Creating Community.”

DVAC has been forming harmonious relationships with local and non-local artists, musicians and performers for more than a decade. DVAC president, Jason Strain said, “We’ve been around for over 14 years . . . we’re heavily involved in the community, and the most rewarding part of being involved with this program is in bettering the community through promoting the arts.” Through fulfilling their mission statement, the council continues to introduce the community to a world of culture and to enrich people’s lives. Note for note, Saturday’s concert series was no exception to the rule.

The two virtuosos of guitar serenaded and mystified the audience with a repertoire of musical magic tricks, techniques, and seemingly effortless talent rooted in Mexican culture. The concert was made possible by DVAC and by the efforts of David Pelham, who’s passion for crafting guitars, and the beautiful classical music of Mexico–led him to Paracho, Michoacan, Mexico and its annual Festival de Guitarra. DVAC Secretary, Anna Ancheta says, “These guitarists are brought from Mexico through the generosity of Mr. Pelham . . . David has been going to the international guitar festival in Paracho, Mexico for 17 years.”

Arellano, of Zacatecas, Mexico, played a diverse set, originating from places like Brazil, Spain, and Argentina. Arellano is a serious student of classical music; she has been a part of the guitar quartet, Tierra Mestiza, and participated in the International Congress of Chamber Music. Her technique and style deployed intricate finger-picking, sweeping arpeggios, tempo changes and crescendos-executed with the sophistication and discipline that classical music demands.

Each song had its own transportive qualities that took listeners on a journey. As one local patron said, “The music is creating the atmosphere . . .and the way the venue here is set up-it adds to that effect.” Arellano’s on-stage elegance paired perfectly well with her style, ending each number with a bow and expressing her gratitude.

Serrano then took the stage and was equally impressive in his abilities; his speed and precision were flawless. He executed such an array of techniques: trill picking, hammer-ons, natural harmonics, etc., that at times it sounded as if two guitars were being played simultaneously. He even used the guitar as a percussive instrument, palming drum beats with his picking hand and performing six-string wizardry with his fretting hand. Serrano has won countless awards in competitions throughout the world, and this year took first place at the Guitarenfestival Nordhorn competition in Germany.

By the end of the night, Arellano and Serrano took to the stage togetherand closed with a guitar duet, ending on another successful note for a community that appreciates and thrives on the arts.

Search: Art of the guitar DVAC