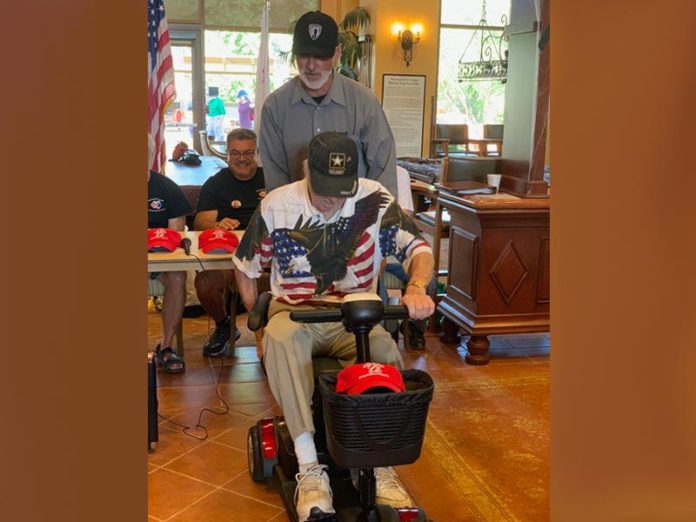 When veteran Sandy Dee began her organization, “A Pawsibility 4 Veterans,” which helps vets with service dogs, Larry Caldwell was among the first to volunteer. “When we began our organization three years ago and Larry immediately volunteered to help. About six months after we began, we helped his service dog “Buster Brown” receive his first service jacket. Now I guess you could say things have come full circle because we’ve been able to help Larry with this wheelchair,” said Dee who represents her own organization and The Cloverlane Foundation.

The scooter, the funding for which came from The Veterans Mobility Project through a grant from Veterans and Friends of Solera of Diamond Valley, was sorely needed by Caldwell, but he thought he’d have to make due with his wheelchair. “I joined Sandy’s organization so that I could get training for my two Saint Bernards. I stayed on to help, but I never expected that I’d be a recipient. When Sandy called me and said she’d found me some help, I said, “For what?” I was that shocked that she knew I needed a scooter, and had gone out and found me one.”

Though Caldwell has been diagnosed with diabetes, had his right leg amputated and most recently lost his big and third toe, the VA, the very organization tasked with helping veterans, turned down Caldwell’s request for a scooter.

In a decision that stunned many, the VA said Caldwell, “…was not fully incapacitated.”

“Through a freak accident, I had fallen getting out of my van, and I broke my hip. I had to have hip surgery, so I really needed the scooter, but they shot us down,” said Caldwell.

“The VA had turn down Larry’s request for a scooter even though he had been through hell. They said he was not fully disabled. This is the kind of thing our organizations see and work with on a daily basis. No one really knows how poorly a lot of our veterans are treated,” said Dee, adding, “My organization, and that of The Cloverlane Foundation have essentially the same mission, “To bring awareness to and to add value to the community and our veteran population in collaboration with other organizations.”

For more information on or to donate to these organizations you may do so at: