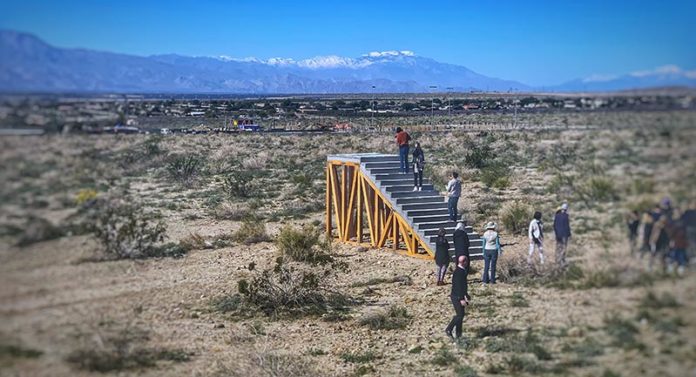 The government of Saudi Arabia, which suffers from a battered image and seeks to open itself to tourism and expand cultural ties with Western countries, has found a willing partner in the Coachella Valley-based contemporary art biennial, Desert X, which said this week it will collaborate on an exhibition in the kingdom in early 2020, which was reported on Tuesday.

Desert X consisted of large-scale site-specific works staged across the Coachella Valley in 2017 and again in 2019. The new exhibition, Desert X AlUla, will be held in northwestern Saudi Arabia and funded by the government’s Royal Commission for AlUla, the Los Angeles Times reported.

Although the Saudi exhibition signals growing international interest in Desert X, three of 14 members on the organization’s board of directors resigned over the decision to work with a government responsible for human rights abuses and the killing of journalist Jamal Khashoggi. The three are artist Ed Ruscha, art historian and curator Yael Lipschutz and philanthropist and former fashion stylist Tristan Milanovich, according to The Times.

Desert X founder and board President Susan Davis defended the collaboration as an opportunity to generate “a new dialogue, one that reaches across boundaries and borders.”

“Our mission has always been to create a platform for conversations around art and to welcome a multiplicity of voices,” Davis said, according to the Times. “Ultimately, it’s a way to have direct communication — artists to artists, artists to individuals, artists to the bigger audiences. Ultimately, we see our involvement as a way to engage with individuals, not to isolate them.”

But Lipschutz, who like Ruscha was a founding member of the board, called the Saudi project “completely unethical.”

“To pretend it’s about some sort of dialogue when you’re receiving money from the Saudi royal family — this isn’t about dialogue among artists, it’s about striking a deal with a national government that has committed a horrific genocide in Yemen, that is completely undemocratic and that has an appalling record of discrimination against the LGBTQ community,” Lipschutz said.

A year ago, Khashoggi, a Saudi dissident and Washington Post columnist, was killed inside the Saudi Embassy in Istanbul. The CIA concluded that the country’s de facto ruler, Crown Prince Mohammed bin Salman, ordered the assassination, a finding the prince denies, though he did accept “full responsibility” for the killing in a recent “60 Minutes” interview.

Davis said that Desert X organizers — other founding board members include collector Beth Rudin DeWoody and former Palm Springs Art Museum Director Steven A. Nash — spent months soliciting artists’ opinions and reaching out to other arts organizations and individuals who had worked in the Middle East. The board had “long conversations,” she said, and a “large majority” voted to pursue the project, The Times reported.

Desert X AlUla, which is scheduled to run January 31 to March 7, is co-curated by Desert X artistic director Neville Wakefield and two Saudi women, Raneem Farsi and Aya Alireza. Artists will create large-scale outdoor works responding to the locale: in a canyon, surrounded by towering sandstone rock formations, across about one mile of the AlUla desert. The exhibition will coincide with AlUla’s annual winter at Tantora music festival, which started in 2018.

AlUla is a historic area that the Royal Commission envisions as an “open museum” focused on heritage, nature and the arts. Archaeological and historical sites are being conserved, representatives have said. The area is home to the country’s first UNESCO World Heritage Site, the ancient city of Hegra.

Desert X AlUla is part of the crown prince’s economic, cultural and social reform plan, called Vision 2030, which includes opening the region to tourism. Last week, Saudi Arabia announced a new visa program that will allow tourists from 49 countries, who aren’t traveling for religious purposes, to enter the country and stay up to three months, The Times reported.