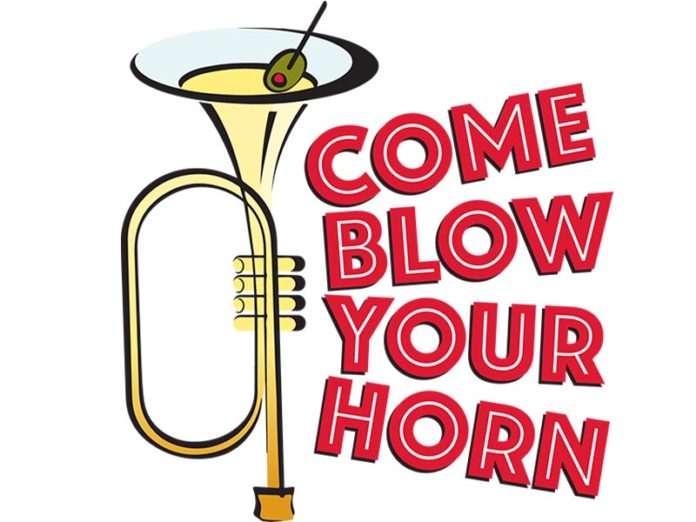 What does it mean to “grow up?” When does it happen? And, does everyone have the same experience? Neil Simon’s semi-autobiographical play, “Come Blow Your Horn” examines all of these questions through the lens of the Baker Family.

It’s the story of a young man’s decision to leave the home of his parents for the bachelor pad of his older brother who leads a swinging ’60s lifestyle.

In the story, there is Mr. Baker, who began working at age eleven and was married at twenty-one: he’s adept at the art of emotional manipulation and is prone to hysterics; Alan, his eldest son, is a thirty-three-year-old confirmed bachelor and womanizer who lives in an apartment in the East Sixties, New York City; Buddy, the youngest, is a 21-year-old virgin and obviously is Alan’s opposite—hard-working, obedient, reserved, and unsure.

Throughout the course of the play, the family struggles to understand and adjust to one another, as the two sons begin to grow up, and the parents realize that they are growing old. Alan discovers real feelings for one of the many women with whom he is currently sleeping and, when she elects to leave him, he falls apart in response. This juxtaposes Alan’s hunger for companionship with Buddy’s metamorphosis into a ladies’ man himself. The playwright points out the fundamental spiritual and emotional emptiness of the playboy lifestyle for which the younger sibling desperately yearns.

“Come Blow Your Horn” is Neil Simon’s first play, which premiered on Broadway at the Brooks Atkinson Theatre on February 22, 1961 and had a London production in the West End in 1962 at the Prince of Wales Theatre. The play closed on October 6, 1962 after 677 performances and one preview. Also, the play was made into a film in 1963, starring Frank Sinatra as Alan and Tony Bill as Buddy. After that, Simon’s play was revived at the Jewish Repertory Theater, New York City, running in December 1987. Then in June 2005 Jacob Murray directed a production at the Royal Exchange, Manchester.

Howard Taubman, in his review for The New York Times, wrote that the play was “smoothly plotted and deftly written…Mr. Simon has served up a multitude of sprightly lines. Best of all, he has provided some explosively hilarious moments rooted in character.” A curious fact is that Simon modeled the on-stage parents on his own mother and father.

Now, Ramona Hillside Players in Hemet will hold open auditions for “Come Blow Your Horn,” this time Directed by Matt Riggle who is looking for the perfect faces and energy to give life to these interesting characters on stage. The Auditions will be held on January 20 & 21, 2020 at 7:00 PM. The performances for this amazing play will be on March 13, 14, 15, 20, 21 & 22, 2020 at Ramona Hillside Players in Hemet.

The audition will consist of cold readings from the script. All applicants to earn a role in the play must be prepared with a resume, headshot, pen or pencil, and a list of conflicts.

Below there is a list of the full cast of Characters and what is required to complete the teamwork:

Ramona Hillside Players would like to wish all applicants good luck and invite all who have the requirements that are requested in the Character List to give their best shot and give their best at the auditions.