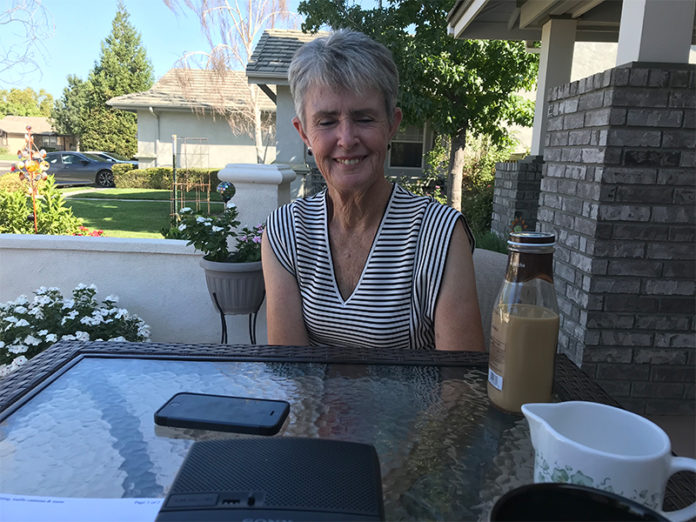 I recently interviewed Sue Savage on the patio at her lovely east Hemet home. It was a balmy morning. Birds were chirping in the birdbath and as a slight breeze swept across the yard, she, her husband and I enjoyed our morning cups of java. She has a shy manner unless something comes up that irritates her. Then, it is Katie bar the door, as you will note.

Q. What makes you qualified and why are you running?

A. Why am I running? Because I was asked to. Someone very involved in Hemet’s affairs came up to me and said, “Will you run for city treasurer? In a moment of weakness, I said, “sure, why not?” Why she asked me is because for two and a half years, I was once or twice a month show up at city council meetings and advised them that, “You guys have got to get your investment policies to comply with the law,” and I’ve made them do that. I advised that they needed to get an investment oversight committee going. The city now has $90 million dollars and I’ll bet you didn’t know that.

A. No one is watching the cash box. They finally formed an investment oversight committee. I was looking at $495,000 dollars. To me, that’s a lot…I said, “This money is not earning anything for the city. Everything else is earning 3% and this $495,000 is only earning 1/4%. Why is that?” I’m just pushing and pushing for them to move it somewhere in two accounts because according to FDIC rules, you can have $250,000 dollars and it is automatically insured by the FDIC. Beyond that, you are gambling with a possible loss in the event of some unforeseen catastrophe. I later learned at another meeting that the city had $100,000 dollars in checking.

Note: I probed about and found that it was the Bank of Hemet.

A. I went down and met with the CEO and president of that bank and I said, “I want that money out.” he said to me, “Fine. Okay.”

I asked, “If it is okay, what’s the roadblock here? I’ve been to city council meeting after meeting and they say you won’t let them take it out and now you tell me it’s okay. What’s the problem here?” I then went back to the city council and confronted them and said, “I’ve always thought that you guys were the most powerful people in town. You’re not…the most powerful people in town are its citizens. So here’s what I’m going to do. I’m going to let people know about the bank and about the money so that the citizens of Hemet can begin to choose whether to continue banking at a bank that I feel isn’t properly taking care of the citizens’ tax-payer money.”

A. So you ask me why I am running for city treasurer. The treasurer that we have now has been the treasurer since 1996.

Q. Who is the current treasurer?

A. Judy Altman. She came in to be when Lori Van Arsdale was on the council. They started city counseling Hemet together and Lori Van Arsdale has still got her finger in the pie, but Judy ran unopposed. She ran six times unopposed. So this time I came at her, those guys got to work. They hadn’t done anything about their policy in four years. After I got after them, they had it done in eight days. I pushed the Bank of Hemet thing and the city got $15,000 dollars more with that same money, so now the money is safe in more than one other bank. Here’s what I think. Hemet is not rich. Hemet is not Hollywood, nor is it a sleepy little town overloaded with seniors. The average age used to be 65 in Hemet. Now it is about 38. Young people with young families moved here because housing and living conditions were less expensive.

A. About 20 to 22 percent are under the age of 18. People in Hemet work hard for their money. Their money doesn’t come to them easily. So I feel if they are forced to pay property taxes and sales taxes should only be invested in AAA investments. I believe they should be liquid. Say we have a serious earthquake or major fire and find the city with no revenue for a period of time, so now you have to pull some of those investments out. Currently, we would be penalized for early withdrawals, so we should be in five-year stuff, whereas we are currently investing in ten-year programs. Most importantly, however, because everybody works hard for their money, I think that an investment folio of $90 million should work hard to generate revenue to offset a general fund deficit. I believe that government should work for the people, not the reverse.

Q. Okay. I have a question. What’s going on with the Measure U funds?

A. Measure U is outside the scope of the Hemet City Treasurer. The treasurer is like a savings account. I’ll be in charge of the savings account; Measure U is a checking account, let’s talk about local area investment funds. The treasurer makes investments. So $90 million dollars is available for investment and you are only insured for $250 thousand dollars per account. So you begin to put money in what is known as local area investment funds. Forty-three percent of Hemet is Latino and forty-three percent is white. Most people don’t know that.

A. I was asked the question, “What are you going to do for the Latinos??

Here’s what I’m going to do. I’m going to look up how much money we have in local investments and what are they? We have $43 million dollars in local investments. I don’t know yet where they are invested. I’m a citizen of Hemet and it is not listed anywhere. Hemet citizens should know where every penny is invested. Their money is listed in the monthly investment report but not broken down to specifics. The job of the city treasurer is indeed to invest. Which means, invest in schools, invest in bonds that build roads, invest in environmental improvements -each of those benefits the 43% Latinos exactly the same way it benefits the Whites because we all go to those schools no matter the ethnicity. When they widen or improve the roads like they should be doing on highway 79. Who benefits from that? Everyone benefits from such improvements. It is not limited to one race or the other. The investments by the city of Hemet benefits every resident of Hemet, not just Whites. The treasurer invests for everyone. Investments come from our savings accounts.

Q. Away from investments for a moment. I’m seeking an opinion now. What do you think about the Florida avenue median?

A. I am a property owner. What happens on my property happens on my property. The city of Hemet does not own Florida avenue; it is owned by the state of California. What I’m telling you is that the state of California owns that property and they are going to do what they want with it. You asked for my opinion. Here it is. The city of Hemet should have sucked up and accepted the offer made to them by the state. They didn’t. It is a complete disaster for emergency vehicles and a disaster for businesses on Florida Avenue.

Q. Okay. How about the crime problem here and we definitely have one? Homelessness?

A. Homeless people don’t always want to be helped. So don’t come with that in my face.

Q. There’s more to the homeless problem than a place to live.

A. So now do you want to talk to me about defunding the police?

Q. That’s a stupid argument. We need the police.

A. Wait a minute. We allocate funds to the homeless because they need drug help, mental illness help, job training. Things that shouldn’t be the policeman’s job.

A. Yes. They need help in training and finding jobs. They need help with mental illnesses, how to get clean and how to present themselves for a job. The police shouldn’t have to deal with those things. They are social issues, not criminal issues. So when someone comes to me and talks about defunding the police, all I’m saying is that some of that money that is allocated to those poor police officers that show up in the homeless camps should be given to social organizations trained and equipped in those things. You’re not going to change how they live by sending in the police. I am an advocate of reallocating money to the social organizations trained in those matters. If the city of Hemet wanted to put up housing on land that it owns, then the investment department should be involved.

Q. Ask any cop and he or she will tell you that it is beyond their abilities to change the homeless situation. The law cracks down from time to time on homeless encampments all over the country and that happens is that setup housekeeping at some other vacant area. You’ve got to do more to help the homeless than to feed their physical appetites.

A. Absolutely. The police shouldn’t be forced to absent themselves from police work to take care of social issues. There’s certainly plenty of official police work to do. That’s what I’m saying.

Q. Back to treasurer. What changes would you immediately make if you are elected?

A. First, I have never been – this is me being honest – not a politician. Let me be plain Rusty. $90 million dollars, 24 years a treasurer and I don’t know Jean Altman, but I doubt she and

Q. Most likely not.

A. No, you would not know by the way the city’s portfolio is reported. Maybe if $10 million were missing. So the first thing I would do is an audit. If I am elected, I will not take over responsibility for $90 million dollars without a complete audit is performed. I want to know where the fees went, where the commissions went.

Q. Isn’t that the job of the Punn group?

A. The Punn group shows up and says, “Show me your excel spreadsheet and I want you to show us where you added that 2 plus 2 is 4. That’s their audit. They don’t really look into things. They add up the numbers presented to them and see that everything looks good. Done. That’s why when I ask for an audit; it will not be from the Punn group. I want an audit that finds every dollar spent or transferred and for what reason. I want to know how long that $90 million dollars has been in the folio and every item accounted for down to the last penny. That’s my kind of audit. The city of Hemet has finally agreed to form an oversight committee and Karlee Meyers was a big help in getting that committee formed. Remember, the treasurer invests money however she wants. So currently, some of that money is invested in unrated banks. The oversight committee must be comprised of people who care what happens to the city investments. None of the current council knows where all that money is invested. I’m really passionate about this. So who is on that oversight committee? The same old tired eyes ignored what the treasurer was doing. That’s my number one promise, number two, I’m going to have a real investment oversight committee. You got me all fired up.

A. Finding the highest interest from solid sources to help secure the city’s investment income.

Note: I thought I knew something about financing. This lady took me through a PHD course.