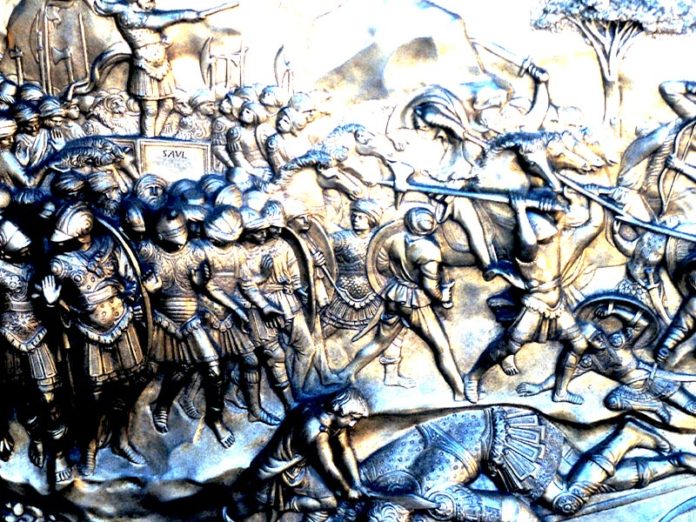 This short article is the conclusion of my last article about the Grace Cathedral, in which I mentioned its beautiful murals and stained-glass windows. This article will concentrate on its glorious “Doors of Paradise.”

The largest Gothic edifice in the West, the Grace Cathedral, in the Nob Hill neighborhood, faces downtown San Francisco and is well-known for its front doors (the central entrance), that has the renownedgilded bronze replicas of the original “Doors of Paradise,” made by the great Florentine Renaissance sculptor Lorenzo Ghiberti (1378 to 1455) for theBaptistery of Florence Cathedral in Italy.

The original doors, created to portray scenes from the Old Testament, took the artist Ghiberti, his son Vittorio, and his workers 27 years to finish.  Installed in 1452, each of the doors are created exclusively of artistic bronze-work, a durable metal that is a fusion of 90% copper and 10% tin. The doors are over 16 feet high and four inches thick, five feet wide, and weigh one ton. Each of the gilded panels is 30 inches square, with 24 figures from the Old Testament, 24 heads, and ornamental flora.

Ghiberti was the first of his time to make use, on such a magnificent scale, of two foremost innovations; graded relief and linear perspective (three-dimensional drawing). The ornate panels are produced by the lost “wax” method, which goes back to the ancient Greeks. For the last phase, Ghiberti individually plated the surfaces of each panel with gold.

During World War II, the golden panels were under the supervision of Bruno Bearzi, master founder and superintendent of the artworks of Florence. It was interesting to hear that during the Nazi occupation, the government ordered the Ghiberti doors be taken down from the Cathedral to safeguard them from bombing and/or to provide Hermann Goring the possibility of adding them to his growing art collection.

In 1943, the original doors were hidden in an abandoned railway tunnel protected under Bearzi’s protective eye. As their caretaker, Bearzi cleaned the doors after the War, and suggested crafting a copy to take their place and place the originals in a museum. Since this did not happen, he wound up making gelatin mold reproductions, which he cast and finished, making replicas and submitting them for sale.

By the late fifties, the completion of the Grace Cathedral was proceeding. One of the Cathedral’s architects, Lawrence Kruse, learned about the availability of the doors. The philanthropist Charles Dr. Field bought these replicas, which were transported to San Francisco, and installed on the recently finished Nob Hill church in time for its official dedication in 1964.

The extraordinary Cathedral entrance is called “Ghiberti’s Doors” or the “Gates of Paradise.” In 1970, Bearzi constructed another door for the Trinity Lutheran Church in Hicksville, New York. There are other copies of the Ghiberti Doors, but none of them are as authentic as the following three – the Forest Lawn Cemetery in Glendale, California, which has a plaster copy; the University of Nevada in Reno, which has one in reduced scale; and the Albert and Victoria Museum in London, England, which has an electrotype copy.

When a young Michelangelo saw the gilded bronze doors, he said that they were so exquisite that they must be the “Porto del Paradise” the “Doors of Paradise!” The originalGhiberti Doors, on the Baptistery of Florence Cathedral in Italy, are no longer there. Conservators determined that they should be preserved in a completely dry, regulated atmosphere, in the museum of the Cathedral. In 1990, a third set of the panels was made from Bearzi’s molds and positioned into the frames of the Baptistery Doors in Florence.

The Grace Cathedral has the world’s most detailed and accurate replicas, and is also famous for its two labyrinths, one of which is based on the famous medieval labyrinth of the Cathedral of Our Lady of Chartres in France, and another labyrinth outside in the courtyards of the Grace Cathedral.  It is also noted for itsextensivestained glass; medieval and up-to-date furnishings and itscarillon (tower bells) with its 44 bells; choirs; and three organs, one of which is from 1934, and has 7,347 pipes behind ornate oak cases.