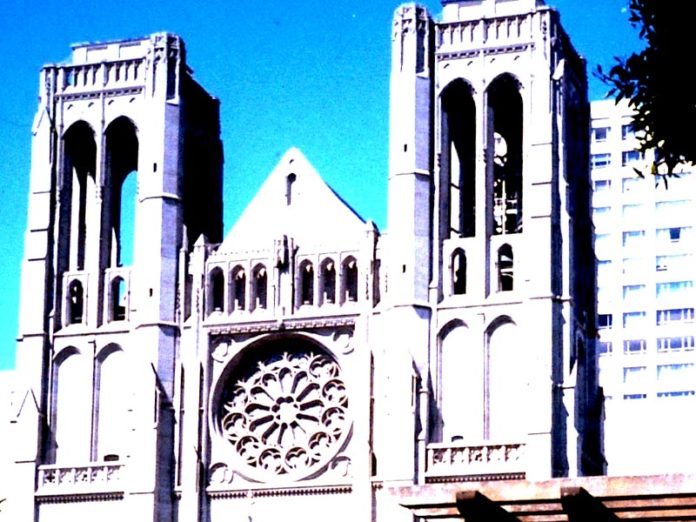 My husband Lloyd and I explored fashionable Nob Hill, San Fransisco, which was the center of opulent living in the last half of the 19th-century. Men who became wealthy from railroading and gold mining, built their homes in this neighborhood. We enjoyed a historical walking tour, then visited the iconic Grace Cathedral, Nob Hill’s ultimate jewel, and the Episcopal Diocese of California.

The Cathedral’s ancestral parish, Grace Church, was established in 1849 during the Gold Rush, then moved into a larger building and called Grace Cathedral, starting in1862: then it was consecrated in 1868. Well-known members of San Francisco society joined the parish in the 3rd church, together with the likes of Leland Stanford and William Henry Crocker.

The 1862 edifice was devastated in the fire after the 1906 earthquake. Situated on the site of where the Cathedral was prior to 1906, was the old Crocker gateway of 1876, the rear carriage gate of the Charles Crocker mansion. The influential railroad baron and banking Crocker family gave their Nob Hill property block as the upcoming Grace Cathedral site.

The cornerstone was laid in 1910, the Cathedral itself was started in 1928, and the last tower was begun in 1960. Meticulously erected, Grace Cathedral was finalized in 1964, as the third largest Episcopal Cathedral in the nation. The architect (Lewis Hobart), was inspired by the great Gothic cathedrals of France and Catalan Spain, such as the those in Amiens, Beauvais, Chartres, and Paris, and he planned the Cathedral in French Gothic style.

A facsimile of Notre Dame in Paris, with roots in the Church of England, and one of the nation’s oldest cathedrals, Grace Cathedral is 329 feet long, with towers rising 174 feet from street level. The north tower has a carillon of 44 English bronze bells (which rang at D-Day, and the centenary of the San Francisco cable car system), and the six-ton hour bell is the largest in the West. The architect used ferro-concrete and steel for earthquake strength and up-to-date consistency.

A noteworthy collection of wide-ranging work by John/Jan Henryk De Rosen is in the Grace Cathedral, one being a faux-tile mural behind the Chapel of reredos, from1932. In the Chapel of the Nativity, we saw the Adoration mural, from 1946, showingtheHoly Family with the Magi and Shepherds. The benefactor wanted the original angels, that were hovering above, to be removed by the artist, with constellations in their place. In the mural, De Rosen included a small image of his childhood home in Warsaw.

We admired other breathtakingmurals by De Rosen, portraying numerous significant events in the history of San Francisco, including those depicting Francis Drake and his crew at nearby Drake’s Bay in 1579, Junipero Serra at Monterey in 1770, the burning of the Grace Churchin the fire following the 1906 earthquake, the1915 drafting of the United Nations charter, and the founding of the United Nations in San Francisco in 1945.

His most noticeable works are the historical aislemurals, painted between 1949 and 1950, and put together by blending components of the early Italian masters Giotto and Mantegna.

There was a 1520 Flemish tapestrythatshowed Jesus and the Woman of Samaria at the well. We learned that the Labyrinth floor tapestry is based on the medieval pavement design at Chartres Cathedral. The Gobelin tapestries showed child gardeners of the Seasons. We also saw the 16th-century Belgian tapestry, the 15th-century carved altar piece, and the 13th-century crucifix.

We admired 7,290 square feetof intricate stained-glass windows, that were produced by renowned artists, and adorned with portraits of biblicallysignificant personalities, depicting over 1,100 figures. Windows include The Chapel of Grace; and the baptistery windows, that contain over 32,000 pieces of colorful glass, and cover nearly 833 square feet. Thirty-two windows or window groups are from 1930 to 1966.

One of San Francisco’s esteemed landmarks, the Grace Cathedral also comprises 24 diverse faceted windows by Gabriel Loire of Chartres, France. The foremost Rose Window depicts St. Francis’ poem “The Canticle of the Sun,” and other windows range from depicting the Gospels to portraying the 23rd Psalm.

The tall faceted Loire windows in the transepts display the commission of Christ, to teach, preach, baptize, and heal. The sizeable New Testament window features Christ and his closest disciples. Lloyd and I were shown a small reproduction window (Notre Dame de la Belle Verriere) of Chartres Cathedral, signifying bonds of friendship with Chartres.

Far above, in the nave clerestory, we saw the Human Endeavor Window Series, which features 20th century Americans. The first two are Exploration (astronaut John Glenn) and Natural Science (Physicist Albert Einstein, featuring his famous formula). Their dense faceted glass, by Loire Studios of Chartres, France, is set in concrete.

Along with the remarkable assortment of colored glass that we viewed, of importance also is the celebrated Aeolian-Skinner organ from 1934 (with 7,347 pipes behind ornate oak cases), the Bishop’s Chair, the Spanish Crucifix, and a sculpture of St. Francis. In the Chapel of Grace, we discovered windows that were designed by Charles J. Connick, along with a 14th century altarpiece. The High Altar is made of California resources, such as Sierra granite, and 2,000-year-old coastal redwood.

Also distinguished for its labyrinths, medieval and contemporary furnishings, along with its carillon, three organs, and choir, Grace Cathedral has developed into an international pilgrimage center for church-goes and us visitors.

The church is renowned for its central bronze reproductions of the “Doors of Paradise,” which were created by the prodigious Florentine Renaissance sculptor Lorenzo Ghiberti, for the Baptistery of Florence Cathedral in Italy, which we also had the pleasure of seeing while touring Italy. Cast from bronze and covered with gold, the fantastic doors portray important biblical panoramas, and I will write about this in my next article.