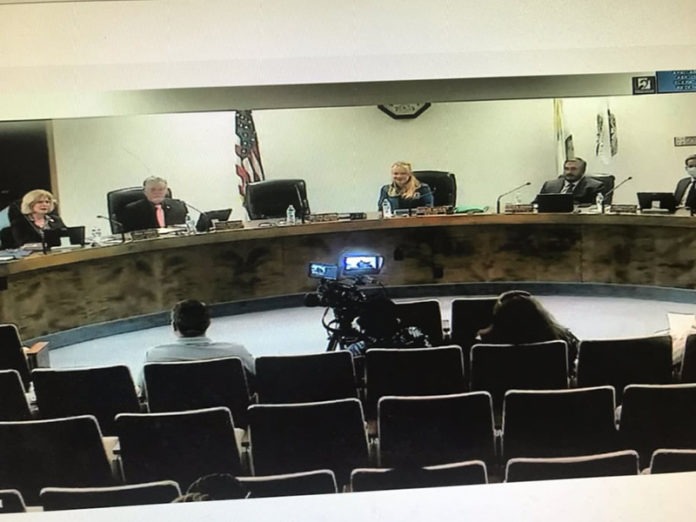 The Hemet City Council met Tuesday evening and, as almost always, plodded along at a slow and tedious pace. However, this meeting produced an interesting agenda with actions that are beneficial to our community. In particular, the Cannabis Resolution passed 4-0 after an often lively give and take. But first, the routine and mundane.

Coming out of the closed session, the meeting began a few minutes past 7:00 PM. The invocation was given by Mayor Karlee Meyer and the pledge of allegiance by Councilman Lilienthal. One item from the closed session was without action and the other was inconclusive at this time.

Laurie Caine, Eddie George and Matt McPherson spoke on the “favoritism” shown to Simon Chu, a downtown property owner, specifically about his lack of permits; his properties and the old Gibbel Building at the corner of State Street and Florida Avenue, which, to date, has no roof and stands as a sore in the center of town.

One of Simon’s new tenants on Harvard Street countered with praise as to how helpful he has been to his tenants and that he works tirelessly to improve downtown. The Mayor suggested that if complainants saw anything wrong to report it to the city and action would be taken.

A couple of speakers complained about the homeless, one emphasizing the homeless settlements behind Winco across the highway from Hemet West Senior Community. Another about panhandlers at the Chase Bank ATM Machine on the west side.

The council received and filed Warrant Registers for payroll periods.

The following items were pulled from the Consent Calendar:

Council approved 4-0 a Resolution of the City Council Adopting an Adopt a Street program for the city of Hemet. This resolution involves organization sponsorships of the program and involves volunteers of minors which require special precautions due to work often done on busy streets. There were a number of amendments prior to passage.

Approved after much discussion and attachments, the waiver of undergrounding and relocation of utility lines related to the proposed improvements at 828 West Florida Avenue (Northwest corner of Florida Avenue and Palm Avenue – Express Car Wash) based on a finding of undue hardship to the developer and determination that granting of the waiver would not result in a negative impact to the public health, safety, or welfare.

After considerable discussion as to whether to choose Gibbel Park or Mary Henley Park as the location, a report was received on the National Fitness Campaign grant funding and provided input and direction on the installation of the outdoor fitness court.

Adopted was a resolution authorizing the City Manager to Execute Right of Way Agreements and Temporary Construction Easements (TCE) with the State of California Department of Transportation (Caltrans) for improvements on Florida Avenue (State Route-74).

And to the issue everyone is breathlessly waiting to hear about. The resolution is setting Cannabis Business License Tax Rates. So far as this reporter could ascertain on Zoom, there have been 133 licenses issued or requested, 66 for indoor, 42 outdoor and 28 mixed. At the time of this writing, we have not had a complete breakdown for publication of the exact taxing, but as far as I could ascertain, sales tax starts at 5% to be raised to 10% after 2 years, manufacturing at 3% and distribution 2%. All others 4%, including testing. If you are as confused as I am, you can reach the city Clerk’s office at 951-765-2300. In any event the tax set up passed 4-0 and what else would you expect. Death and taxation – never ends.