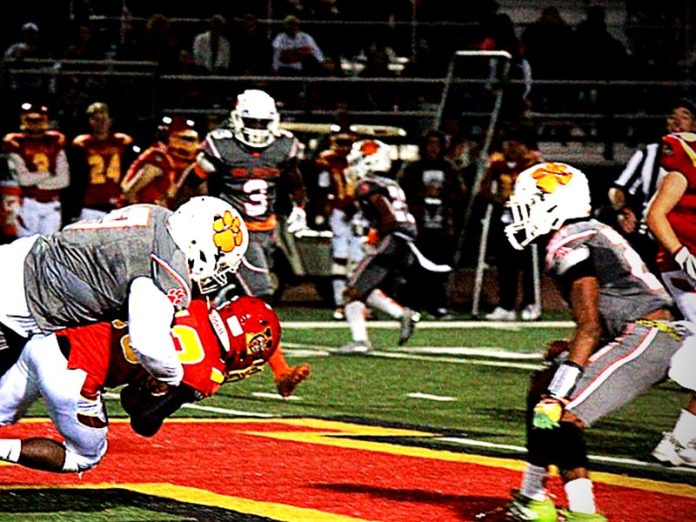 (Historic Rivalry Comes To An End)

San Jacinto Pulls Off The Trifecta

A tradition that has taken place in our two towns as long as anyone can remember. The Battle of the Bell, where Hemet High takes on San Jacinto High in a cross town rivalry game. This year the JV game was played at San Jacinto and the Freshman played at Hemet. There was a lot of talk between the players leading up to the game. Most of them are childhood friends who spent their juvenile years playing together. San Jacinto hasn’t lost to a local team in the last five years and they were bent on continuing that winning streak. The JV team dominated their matchup on Thursday afternoon (20-6), which would be their first win of the season. The Freshman team handled business Friday (48-14) just hours before the varsity game.

Before the battle of the Bell took place Hemet celebrated their Senior night where they honored their teammates who would play in their final home game in the season. The seniors posed for pictures with their family members and took pictures together. When the ceremony was over, it was time for the Bulldogs to get to work.

San Jacinto was back to receive the ball to open the game. Senior kicker Asaiah Aguilar kicked the ball straight to San Jacinto Tigers senior receiver Antoine Sullivan. Antoine snatched the ball out of mid-air made one cut and turned on the jets. Antoine flew down the sidelines and there was no chance that a Bulldog was going to catch him. Antoine cashed that return in for 6 points.

(Historic Rivalry Comes To An End)

The game was very chippy, fans in the stand kept egging each other on with chants. San Jacinto’s running back Juan Denny decided to quiet does the crowd and ran a touchdown in. it didn’t help the situation too much, Hemet’s stands started to boo louder at the Tigers. The tigers wouldn’t have much success on the next drive. A couple of flags for unsportsmanlike conduct would walk them back to the endzone. There was a bad snap on a Tigers punt attempt which would result in a safety for the Bulldogs. The Bulldogs would return the ball and get a couple of first downs. The drive would end in a field goal attempt with was good. San Jacinto would answer their field goal with another touchdown (15 yard run by Kajiya Hollawayne) going into halftime the score was 5-21 with San Jacinto on top.

San Jacinto’s defense came out in the second half determined to shut down Hemet. And they did just that, for the rest of the game Hemet would be under the constant pressure of Sheldon Newton and Mahe Hamala. The two big guys coming down the middle would isolate Hemet’s run game while San Jacinto’s defensive backs Kameron Rocha and Keith Hunter eliminated the pass game. San Jacinto would get in the endzone one more time (A run from Kelvin Davis) and the game would finish with a score of 5-28.

Player of the Game goes to the whole defense who kept Hemet High under 200 all purpose yards, they also had one interception, two pass deflections, and multiple sacks/quarterback hurry ups. Coach Ryan Cogdill did a great job preparing his team for this game and the players did a great job of following their assignments and doing their job. Coach Ryan said this about his defense, “the kids practice really well this week and locked in to make sure we get the finer things taken care of. This was a game we can truly build upon for the next two weeks.”

A victory in this game means that San Jacinto will keep the bell until further notice. Hemet is leaving the next year, which means they won’t have to play San Jacinto. They could schedule each other outside of league play, but there is no evidence that they want to do that at this time.