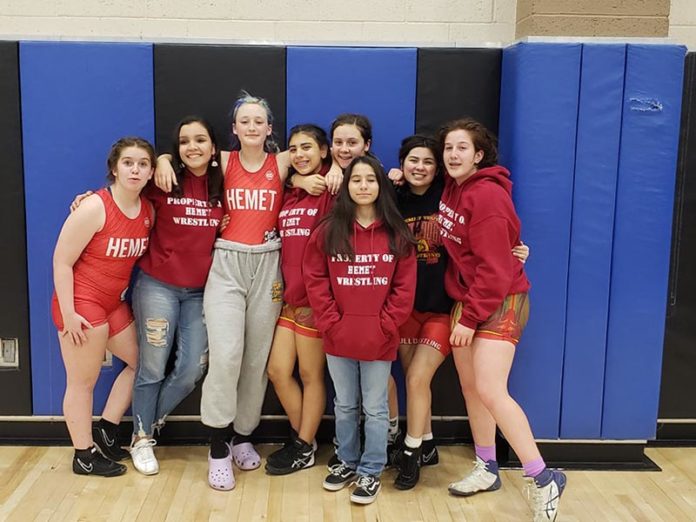 Years ago it was considered “taboo” to have a girl on your wrestling team. They had a hard time finding people to wrestle and most schools would just forfeit those matches. However, more and more girls these days have taken an interest in wrestling and have made it a point to dominate their opponents no matter their gender. Schools have started creating programs and building girls-only teams so that the female wrestlers get just as much of a chance to wrestle as the boys do. Locally there is none better then Hemet High’s girl’s wrestling program. Right now they have ten girls on their roster and just recently beat Beaumont in a duel meet 27-9.

The girls on the Wrestling team roster is; Courtney Quintana, Mya Lozoya, Violet Cayton, Brooklyn Cohen, Samantha Barragan, Monique Moreno, Reyna Montenegro, Erika Tista, and Yasmin Far. These girls are out to make a statement: they don’t care what you think about girls wrestling. They are here to lay bodies on the mat and dominate every gym they walk into.

Currently, Samantha Barragan is ranked 3rd in the state in the 121lb division. She is making her case as a top wrestler in the state and is hoping to bring a CIF championship back to Hemet. She is the highest-ranked member of the girl’s team at Hemet according to Calgrappler.com and she is bringing major attention to the school’s wrestling program.

According to the National Wrestlers Coaching Association, the tide is beginning to turn for women’s wrestling. In 1994 there were only 804 female wrestlers across the country. At the end of last season (2018-2019) there were over 16,500 female wrestlers in America. At the beginning of 2019, the NWCA started a bid to allow women’s wrestling into the NCAA. The NAIA has had women’s wrestling since 2018 and now there are now 63 colleges with varsity wrestling programs.  In 2004 the Olympics Committee began to recognize it as an Olympic sport: this gives these girls something they can aim for.

Hemet’s girls wrestling program seems to be heading in the right direction. Especially since their main lady Samantha Barragan is only a junior and has already built herself quite the resume. She is the number one 121lb wrestler in the Southern Section and still has another full season ahead of her. Now, more than ever, girls are proving that they can do whatever they put their mind to and fight past the stigma society wants to place on them. If you have a daughter who dreams of becoming a wrestler, get them started early. There are plenty of MMA/Jiu Jitsu gyms in the area that will help give them a head start amongst the competition when it comes to wrestling. For a more traditional approach to wrestling, there is always the Hemet Youth Wrestling Program.