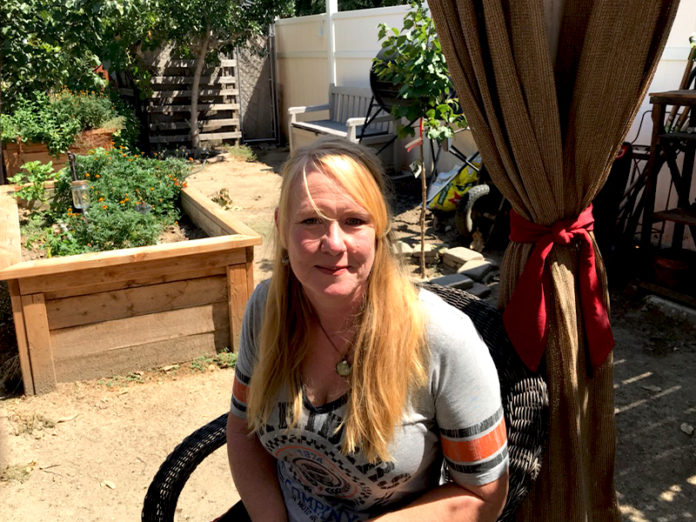 Whatever Karlee may be accused of, she is no dumb blonde. She is a female David taking on political Goliaths and her determination is more powerful than any sling-shot ever invented. At her home, she has one of the most green of green gardens you will ever see. I recently sat with her in a bower for this interview.

Q. You have received a lot of criticism during your first term, so why would you want to go at it for a second time?

A. I thrive on criticism. If you aren’t criticized once in a while, it means you’re not doing anything. I value constructive criticism. The rest I ignore.

Q. You really created a storm over Measure U. What was that all about?

A. I discovered 5 million dollars not accounted for in the Measure U account.

A. Two council meetings ago, we were presented with 646 pages in our agenda package due to the annual financial audit done by the PUNN Group, who have been doing that for us over a number of years.

A. An outside auditing firm. For the record, Mike Percival and I voted not to reuse the group, but we were voted down 3-2.

Q. Why were you against the renewal of their contract with the city?

A. Because every year, there seems to be a different issue not addressed and it is frustrating. At the last July meeting, we were supposed to have a work-study to go over the Comprehensive Annual Financial Report. We received our packets on Thursday evening for a council meeting the following Tuesday. 646 additional pages is a lot to digest in five days. That weekend we had a meeting at my house, to go over the package. We went over the audit, compared notes, asked questions and made a list of things to do. When we started comparing notes, the 17-18 balances were not rolling into the 18-19 balances as they should have. There was money missing, which no one could account for. I called the City Manager about the errors before our meeting. His office had about an hour to look into it, so they canceled the meeting for the July work-study because of the errors.

Q. What did the City Manager have to say about that?

A. Two weeks later, the staff took full responsibility, and the errors were found. It was in a separate account. They called it a “mapping error.”

A. It is called the “Peg Fee Account, which is another line item. It is for broadcasting and something that needs to be looked in to. So I question how it got there because the money had already gone through our Finance Department, through the auditors before the council meeting. This creates downs about the system.

A. Glad you’re taking an interest in that.

Q. Oh, I’m very interested and I’m sure our readers will be, too.

A. I get a bad rap for speaking out and voting no on things I have doubts about. Two council members were making fun of me two meetings ago. Good thing I took the time to do the math because our job is not to trust the professionals, as I’ve been told by our mayor. Our job is checks and balances. So I feel obligated to the people of Hemet to speak out when something is questionable. We should not have secrets from the people who elected us. At the next meeting, the City Manager took full responsibility for the errors and is correcting them. I would encourage people to watch our meetings. They are usually on YouTube the following day if you can’t watch them live. At the August meeting, the PUNN Group said it took them 5 to 6 months to get the bank reconciliations from the city. There is no reason for those ever being delayed from being available to anyone.

Q. Who knows what else is floating out there?

A. Right page 11 of the CAFR report has our taxes and it states that Public Safety is receiving 48% of taxes. There are other funds like Water. The top graph shows sales tax of 37% and Measure U tax of $16. I don’t believe this is correct. The 1% we get on the sales tax because of Measure U matches what we usually get on the regular tax and then there are some other taxes. When I inquired, I did not get a clear answer and still haven’t.

Q Because the numbers don’t match?

A Right. At the meeting, it was brushed off with, “Oh, well, there are other taxes.” Those kinds of answers create questions. It is part of my job, whether anybody likes it or not, to ask questions if I have them. So, why am I running for office again? Because I am 5th generation in Hemet. My kids live here, my parents live here, my sister lives here and even my 95-year-old grandfather lives here. I am just protecting the citizens of this town. This can be a thankless job and as much as I get beat up over it, I care because I have the heart and passion for our city. It isn’t about title, politics, or anything else to me. Seeing to it that the numbers match to me is part of it.

Q. If the numbers don’t match, it might indicate something wrong?

A. The question I now ask, “If I hadn’t found that error, what would have happened to that money? Nobody has a valid answer for that. The auditor said to me, “It’s a rounding error.” Everybody knows that rounding rules don’t change. So my running for council again is keeping the integrity of the council and keep transparency.

A. All I can say to you is the city needs to be by the same rules for every person. We’re getting close to that thanks to Chris Lopez, our current City Manager who has brought in a lot of new norms. He’s young. He’s creative and he’s an excellent problem solver. He has an efficient way of thinking and will benefit the city in the future. Each property owner is limited to what they can do according to their financial situation, but as long as everyone is governed by the same rule book we should do better.

Q. Whatever happened to the homeless task force?

A. The council dissolved it early this year. I thought that a bit odd, so we started the Community Outreach Committee. Linda Rogers of Valley Restart is head of the Homeless Task Force and kind of taken the lead in our outreach committee. We have 66 members and each contributes to the committee according to ability and talents. It really works when folks get together and offer their services to make us a better community. After all, the city belongs to all of us, not just s monied few.

Q. Hemet has a lot of problems.

A. Yes. We need more jobs; we have a crime problem, panhandlers are so aggressive they scare people, especially seniors. The council should keep a close eye on the Measure U money.

Q. I’ve been told many times that Hemet is not business-friendly.

A. You’ve been told right. It is very difficult for a new business to open in Hemet. We need to become a business-friendly community and that will take some doing.

Q. Who chairs the Measure U Committee?

Q. That committee provides for public safety, doesn’t it?

A. Supposed to. Mike and I voted “no” on the last budget because we eliminated positions that we promised the taxpayers.

A. Police and Fire. We took away positions from the police and fire departments.

A. We are one of the only cities to pass a public tax program for safety to turn around and eliminate services. Who can be asked to fork up $10 million dollars a year and not expect to get something extra done? The city council violated their own resolution by reducing Fire Station 5 to a Medic Station. When the budget passed, we resolved how many positions we were going to fund, then the majority unfunded the positions without voting on it.

Q. How many positions?

A. Three at Station 5, pus taking away a fire engine. That was a part of Measure U to put an engine at Station 5. They did it and then took it away. People are mad because they paid the tax. Some are even looking for lawyers to demand that the city stick to its promise. I understand their anger.

A. I rest on my record. The people who voted for me know me and my record. I’ve done nothing wrong as a councilperson. My goal is to see that the taxpayers get what they’re paying for. I believe in honesty and most of all, transparency in government.