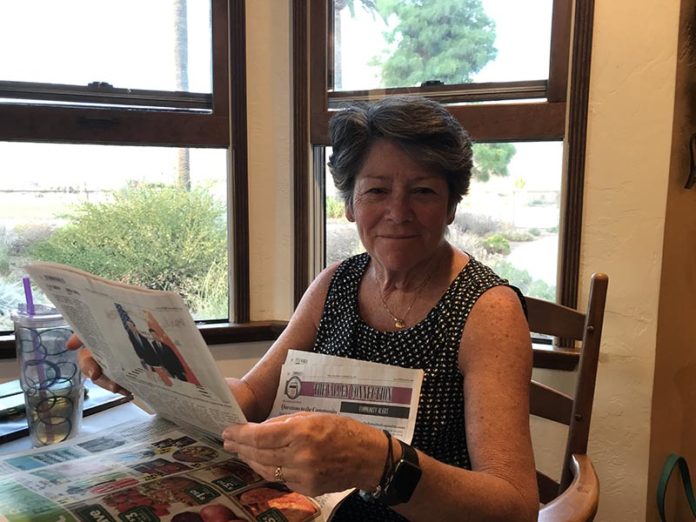 Her looks and demean belie the streaks of grey and some sixty-plus years. She shows no signs of age. Ann Record is a human dynamo. Her eyes twinkle with mischief, ambition, and ‘let’s get on with the show.’ She is a real trooper who has devoted her whole life to the service of others in one manner or the other.

How did she come this far and where is she headed? I asked those very questions. “My parents moved to the San Jacinto Valley when I was four years old. They were both very involved with community activities. Dad was a doctor; mom was a registered nurse. She gave up her nursing career and immersed herself in the Family Health Center and Family Service activities such as Mental and the Physical Health Services Association.

She encouraged Ann and her six siblings to do the same. Helping others became a way of life for the entire family.

“All seven of us kids were expected to follow our parents into the field of service beyond self, and we did it willingly.”

They all volunteered whenever help was needed.

After graduation from high school, she married Randy Record, whose family shared a dedication to service within the community. Her husband’s father, Clayton Record, also instilled in his children the importance of community. Clayton went on to serve several terms as Riverside County Board of Supervisor. Ann’s mother became good friends with the elder Record, and they shared a mutual interest in both private and public service ideas so merging of the two families was a boon to both families.

Following college, Ann took a teaching position at Hemet High School, where she taught specific elements of agriculture, such as plant culture.

“I enjoyed teaching, but I took time away after we started a family which turned out to be two beautiful daughters.”

She took several years off to get her daughters off on the right foot and then went back to teaching but instead of returning to agriculture, she switched to elementary education and during that time she went back to school to obtain a master’s degree after which she taught in the San Jacinto School system where she taught until retirement 3 years ago. However, retirement is just a word to this lady with the drive of a steam engine who finds time to shuttle back and forth from our valley to San Diego where to her two grandchildren, back home for a spell and hen off to a young grandson in Paso Robles.

She is still involved as much as ever in the community here. She still carries a full plate of local duties.

“I serve on the board of The Western Science Center by Diamond Valley Lake and also the board of Healthy Family Foundation, helping with their fundraisers. I work with them. I’m not in charge of anything. There are folks who do it as a full-time job. I only help out where needed and when asked.”

I have no doubt she will be needed when she is 90 and no further doubt that she will live beyond that age. Her kind does not go quietly because they always find something or somebody that needs help. A rare gem that we’re proud to declare A Profile In-Service. Just sayin’