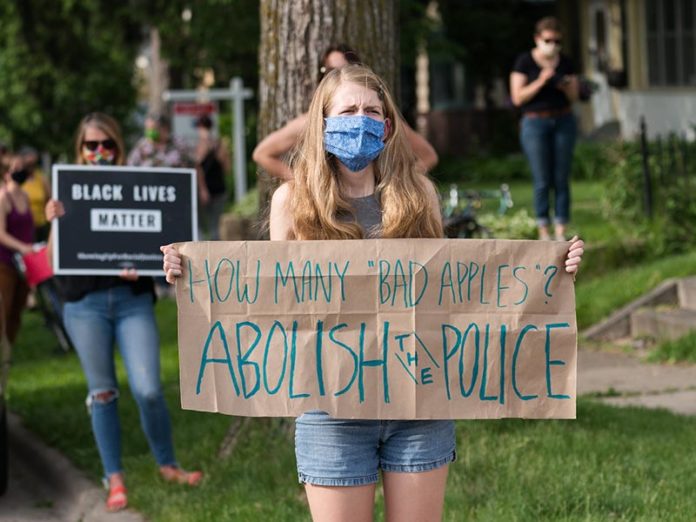 The idea that there is a systemic problem with racism in the United States is a pill too big to swallow for some. We tend to act as if we have put racism behind us. We elected a Black president. Twice. We must then, collectively, be more open-minded, right?

That kind of mindset often leads to the “one bad apple” theory.

I saw this recently in my Facebook group. I had posted about a photograph that went viral of Samantha Francine, a Black woman protesting police brutality, being shouted at by a White man in Whitefish, Montana, my home state. As comments on my post and direct messages poured in, three themes emerged: 1. This protester was a brave woman who should be admired and emulated. 2. There’s more racism around us than we want to admit. And 3. This angry White man was an anomaly, maybe not even from Montana.

As I wrote in the post, if you grew up in Montana or any other place without a lot of diversity, you can trick yourself into thinking that you have no biases. As a Montanan, we tend to idealize the “live and let live” ethic, and I have heard more than one Montanan say, “I don’t see race.”

So, I wasn’t surprised when some of my friends were quick to denounce the man but also to focus on him instead of on the problem of racism.

When writing about health and health care, it can be similarly hard to step back and see the ways in which racism and discrimination are hardwired into some of the growing health disparities in our country and the differential ways people are treated by the health care system. If you are White, and you had a good experience with the health care system, you can easily assume that it must be the same for people of color. This is the same kind of thinking that White people have about the police — until they see a video of a Black man with an officer’s knee on his neck.

Arline T. Geronimus, a behavioral scientist at the University of Michigan, first wrote about “the weathering hypothesis” in 1992, the idea that racism breaks down the health of Black Americans at a faster rate than Whites. That initial work has been cited nearly 1,000 times (quite good for a scientific paper). Over the years, Geronimus and other researchers have built on that initial study. In 2006, for example, she and other researchers examined survey data from thousands of Black and White Americans. They wrote:

“We found evidence that racial inequalities in health exist across a range of biological systems among adults and are not explained by racial differences in poverty.”

This is key. Often when we are writing about race in health, we default to the idea that Blacks have historically had a lower socioeconomic status than Whites. Poverty among blacks itself is the outcome of systemic racism, as its roots go right back to the long history of slavery in the country. Whites have the benefit of centuries of wealth being passed down through generations and centuries of property being bought and sold — all the while appreciating in value — among fellow Whites. But the problems with health disparities go beyond poverty.

Such disparities also go beyond behaviors. Often, journalists will talk about blacks having diets that contribute to poor health, or that they smoke more, or that they are less physically active. David Williams at the Harvard T.H. Chan School of Public Health and colleagues examined data on chronic disease risk factors in adults 40 and older. The study focused on Blacks, Whites, and Hispanics, looking at blood pressure risk, inflammation risk, and metabolic risk, including cholesterol and body weight. They created a summary indicator of total risk to see how many of these risk factors were outside of the normal range. They wrote:

“This study found that even after adjustment for income, education, gender and age, blacks had higher scores on blood pressure, inflammation, and total risk. Importantly, blacks maintained a higher risk profile even after adjusting for health behaviors (smoking, poor diet, physical activity and access to care).”

Williams’ research, and other research in this vein, touches on many different ways in which racism has an impact on health. One of them is place. Again, Whites can tell themselves that everyone has complete agency. That we choose where we live, and if we live in a neighborhood that contributes to our physical and mental health it is because we worked hard and earned that right, not because racism has kept non-Whites out. Williams and his colleagues explain:

“These differences in neighborhood quality and community conditions are driven by residential segregation by race — a neglected but enduring legacy of institutional racism in the U.S. Considerable evidence suggests that because of segregation, the residential conditions under which African Americans, American Indians and an increasing proportion of Latinos live are distinctive from those of the rest of the population.”

This is not a behavior problem. That’s a structural problem in how we’re organized as a society.

Structural problems are harder to document and capture as journalists, but if there ever was a time to try, it is now.