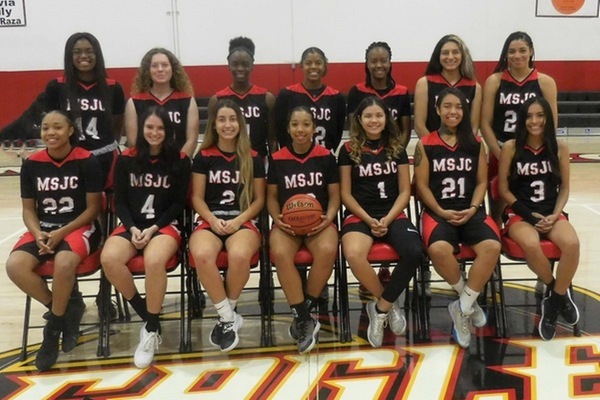 The MSJC women’s basketball team saw their 26 game winning streak and 2019-20 season come to an end on Saturday, March 7th, 2020, night as they lost in the CCCAA Southern California Regional Finals at Mt. San Antonio 48-40.

The Eagles struggled all night offensively and fell behind 16-6 after the first quarter. Despite playing some great defense of their own the rest of the way, and controlling the glass in the evening, MSJC just made too many mistakes down the stretch to overtake the Mounties. Midway through the fourth period, it looked like the Eagles were poised to catch the Mounties when Mariah Sanchez hit a three-point shot to cut the lead to 38-35 off of a nice assist from Deja Blue. Haylei Janssens would again get the Eagles within 3 with 3:46 to play in the game when she made a jump shot to make the score 40-37 in favor of Mt. SAC. MSJC then committed a flurry of turnovers and missed a couple key shots down the stretch that could have tightened the game even more. Late free throws by the Mounties put the game out of reach.

Blue led the struggling Eagle offense with 15 points; she was the only MSJC player to reach double figures in scoring. She also had 9 rebounds and 3 assists in the loss. De’Adra Ross played her final game in an Eagle uniform and dominated the backboard as she pulled in a game-high 24 rebounds to go along with 7 points as MSJC outrebounded the Mounties 55-36. Janya Smith came off the bench to add 7 for the Eagles. In the end, both teams shot the ball poorly with MSJC finishing the night 14 of 58 from the field while the Mounties were just 13 of 56. The difference turned out to be turnovers as the Eagles committed 28 of them in the game, including 17 in the second half, while the Mounties ended the night with just 15.

The loss ended a school-record 26 game win streak for MSJC; they had not lost a game since November 8th. The Eagles finish the season with an overall mark of 27-3, they went unbeaten in the Inland Empire Athletic Conference and claimed their third straight conference championship. MSJC was making their 14th consecutive appearance in the postseason and have reached at least the State’s Sweet 16 in five straight seasons. The Eagles only three losses of the season were all to teams that reached the State Final Eight.