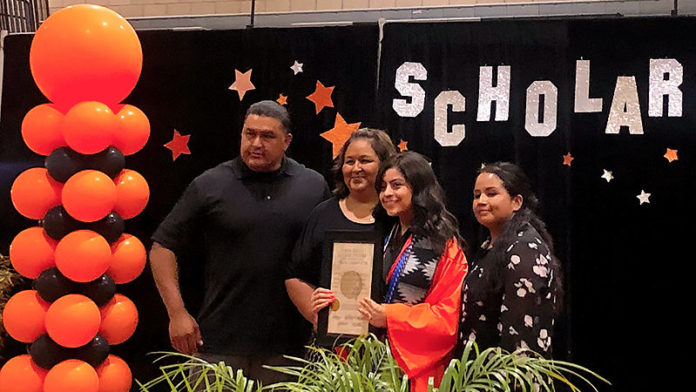 As part of its ongoing encouragement of higher education goals, The Soboba Band of Luiseño Indians’ philanthropic foundation awarded $25,000 in scholarships to high school seniors in the Hemet and San Jacinto unified school districts during year-end graduation and awards ceremonies.

“It was money that was earmarked for education purposes because the entire foundation believes that helping youth realize their future dreams is the best way they can give back to their communities and society as a whole,” Soboba Foundation President Geneva Mojado said.

Alexis Alcántara volunteered countless hours in her community and on campus and works two jobs to help support herself. She was accepted by five colleges but settled on California State University, Fullerton to pursue her degree in nursing.

Kayla Cervantes excelled academically with a rigorous course load and received perfect attendance awards. She is a lifelong dancer who will attend the University of California, Davis as a nursing major with plans to become a nurse practitioner.

Jarrod Chapparosa was successful in track and field and his goal is to become a firefighter. The young father always pushes himself to do the best he can so he can be a great role model for his daughter.

Serenah Gomez contributed many hours to community service while earning credits toward graduation. She wants to become an obstetrician and is motivated by the idea she can support others with the knowledge she will gain through her educational achievements.

Tyrese McEwen worked hard at school and was able to graduate early. He is taking automotive mechanics courses at Mt. San Jacinto Community College and wants to own his own shop one day.

Emma Medrano maintained high grades and was nominated for numerous awards while in school. She will attend the University of California, Riverside with a double major of Microbiology and Public Policy in order to become a research scientist tackling modern animal studies.

Julie Moreno participated in many clubs and made Honor Roll all four years. She will attend the University of California, Irvine as a Biological Sciences major in her the quest to become a gynecologist.

Alexis Randall has a desire to help children and finds inspiration in her mother who accomplished her goals through initiative and passion. She will attend California State University, Monterey Bay majoring in business and education with plans to become a special education teacher.

Ashley Rae Saucedo was active in her school community through various clubs and Student Council. She will attend Riverside City College as a Psychology major so she can be a child trauma specialist in the future.

Samantha Torres was an AP Scholar with Distinction, a Carson Scholar and received many honors. She was accepted into six universities and has chosen to attend USC (University of Southern California) with a major in Human Biology and then continue onto medical school.

The Soboba Foundation fully supports education and the pursuit of higher education of all students within the San Jacinto Valley.