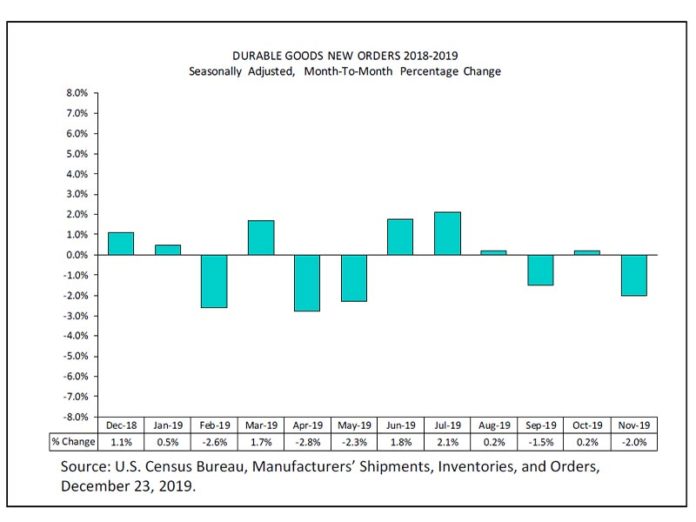 End of year numbers are starting roll out and there still seems to be a divide that is widening. It will break this year and which side reverses will set the course. If the slowing or receding areas of the market shift positive the market solidify and the Fed’s will stay pat and if they expanding areas slow or recede the Fed’s will have to consider lowering rates to stimulate the economy and stem a slowing economy.

Some takeaways this week were early pointers for how the fourth quarter may turn out. One of the reports was Richmond manufacturing contracts. This index is a “gauge of broad activity in the manufacturing sector in one of the districts. It represents a weighted average of the shipments, new orders and employment indices.” In December it contracted by 4 points and is now at -5 and had been negative in four out of the last six months. It reports that shipments, new orders, and capacity utilization declined and inventories built up at a faster pace. It also showed thought that hiring picked up and wage growth grew. It was noted that manufacturers were optimistic and felt the conditions were only temporary. Of the four regional factory indices that have reported in December three have declined and two are in contraction territory. Clearly, this represents that manufacturing activity remains weak.

On a positive note, weekly retail sales rose 0.6% last week and advanced 2.2% y/y. Also, new home sales for November were reported and showed at 1.3% increase to 719,000 but below the consensus of 730,000. The last three months were also revised down by 29,000 units. However, the three-month average sales rate increased up to the highest level since September of 200. This is clear benefit of lower mortgage interest rates. Housing contributes largely to employment so this is an especially significant sign.

Another significant report was durable goods orders. They sagged by 0.2% in November despite a consensus of +1.2%, the most in six months. The biggest culprit was transportation orders led by defense orders. Excluding these it would be flat. On a year over year basis durable goods sank 3.5%, the largest decline since August of 2016. Durable goods are an area of consumer products that do not need to be purchased frequently because they are made to last for a long time, usually three years.

You can see that several reports are strongly showing movement in their direction of expanding and contracting. Well, 2019 brought many surprises to us all and it will be a year to remember. I look forward to providing information for your trades and portfolios this new year. Wishing you all a Happy New Years. Cheers!