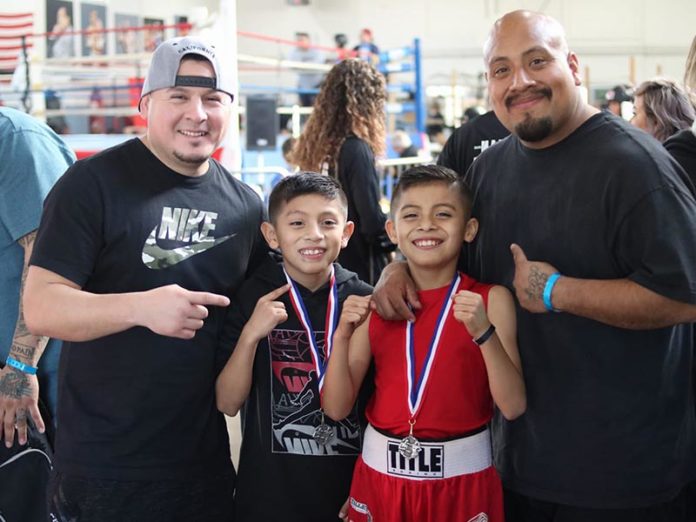 The Herrera Brothers are at it again. While other kids were eating candy and playing Fortnite during winter vacation. The Herrera Brothers were running miles, hitting mitts, and sparing. All in preparation for the 2020 Silver Gloves regional championship. Winning this tournament would set them up for nationals. Which takes place later this month. However, they had to handle business in Compton CA,. Both boys had to face tough opponents that would challenge their cardio & technical skills. There were a lot of kids at this tournament which would give the Herrera brothers an opportunity to get a lot of rounds in. Both boys had to fight five different kids in their respective division and they did so with ease.

In true Herrera Brothers fashion, they both stepped on the gas and never let up, proving to be the boxers with more energy and passion in the ring. Not only to the boys pour on an aggressive onslaught of strikes. They also possess very crisp technical abilities. They have excellent footwork, controlling the ring and finding great opportunities to strike. They do a great job forcing their opponents out of their comfort zone and making them fight the style of fight that the boys are comfortable in. They are also becoming really good at counter striking. A style of fighting that has always been a little on the dangerous side.

It involves not being the aggressor and actually waiting for your opponent to strike. Then finding holes in their game and exposing it. Some of the best counter punches of all time include Muhammad Ali, Floyd Mayweather, and Conor Mcgregor (MMA). Often times these fighters don’t throw as many strikes in a round as others, however their punches land at a higher percentage and tend to deal much more damage.

Adding this to there game is going to be key for their next tournament. Where they will take on the other Regional Silver Gloves Winners and compete in the Silver Gloves National Championship. This fight will take place at the end of the month in Kansas and the boys will be representing the San Jacinto valley while they are there. This is just the beginning of their 2020 season and a great way to start. If they can beat the best of the best at Nationals the boys will be setting themselves up for a breakout year in 2020.

Various tournaments are on the horizon for the Herrera Brothers in 2020 including defending their Sugarburt title belts, Junior Olympic qualifiers, and independent tournaments held all around the country. On top of that, another Herrera Brother is coming on the scene. Ayden will be turning eight years old and start competing later this year. Keep at it, boys! Thank you for representing our valley with professionalism, class, and great boxing.