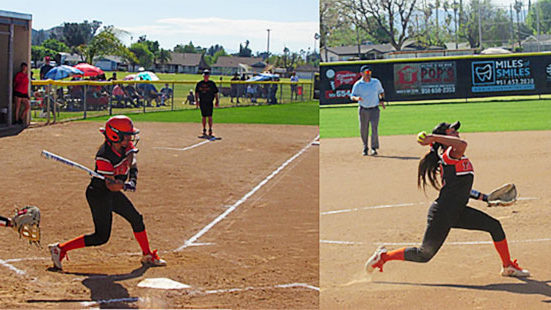 Alexis De La Cruz, better known as DLC, just graduated from San Jacinto in June. She led the Mountain Pass League in strikeouts last season and was voted All-League. She is making headlines this week as she signed a letter of intent to join the Felician University Softball Team. I know this is a dream come true for her and her family, most girls who grow up playing Softball only dream of opportunities like this. Alexis spends her summers playing for the SoCal Dynasty Softball team, and that is where she started to get attention from college scouts. In high school, she kept her grades up and her dominant pitching up to keep the scout’s eyes on her.

Felician is a member of NCAA Division II and competes in the Central Atlantic Collegiate Conference. The Golden Falcons expect to begin the 2020 campaign with a 10 to the 14-game trip to THE Spring Games in Clermont, Fla., in early March. Where we can expect to see Alexis debut as one of the pitchers there. I will be trying to figure out how to stream her games for the community to see and cheer her on. At the very least, I will be writing updates on her games and performances in the paper for the community to follow.

Felician is located in New Jersey which should serve as quite a culture shock to DLC who is a Southern California native. Cold winters and plenty of snow and rain will be a new experience for her, but what won’t be is that diamond. I got the honor to watch DLC play a couple of times this season, and she had a unique way of keeping her composure no matter what the situation was. One thing is for sure; she throws HEAT! But the most impressive part of her game is her confidence rather in the circle or in the batter’s box she shows up ready to play and put in work.

While at Felician University DLC is going to major in biology, she intends on playing there all four years and would love to leave a legacy behind when she graduates. Felician University is excited to have her, and the city of San Jacinto is proud of DLC. The Hemet & San Jacinto Chronicle would like to congratulate Alexis De La Cruz on all of the hard work she has put in over the years to get to this spot. I’m sure there have been many hours, long car rides, blood, sweat, tears, and pain, but it’s all been worth it to get to this point. Now it’s time for her to get back to the grind and back to work as she represents the valley every time she steps in the circle.

Battle of the Bell

Kyle Headlee - October 17, 2019
It's Rivalry Week in Hemet & San Jacinto. In our game of the week the San Jacinto Tigers are going to travel to Hemet High for the Battle of the Bell this Friday night.

Kyle Headlee - February 13, 2020
Spring sports are around the corner and you know what that means: baseball season is here. Let's take a look at how the teams finished