SAN FRANCISCO (AP) — Gov. Gavin Newsom on Wednesday urged all California schools to reopen, emphasizing that there are no state or health barriers to getting children back into classrooms and ending distance learning.

His frustration was evident: “Money is not an object now. It’s an excuse,” he said. “I want all schools to reopen. I’ve been crystal clear about that.”

Newsom spoke at an elementary school in Santa Rosa that began welcoming students back this week. But his wishes remain an expectation rather than a mandate in California’s decentralized education system, where 1,200 school districts negotiate separately with teachers unions and ultimately govern themselves.

Facing political pressure and a recall effort, Newsom said last week he plans to lift most of California’s coronavirus restrictions June 15 in an effort to reopen the state to business-as-usual. He said he expects schools to join in.

More than a year after the pandemic forced California’s classrooms to close, some of the largest school districts are reopening, including Los Angeles and San Diego. LA Unified’s superintendent has said that communities hardest hit by the pandemic are more reluctant to send their children back to school.

Newsom said that more than 9,000 of California’s 11,000 schools have reopened or have set plans to reopen, but that number is misleading because there is no uniformity in what it means for a school to be open. Some are offering one or two days of in-person instruction, mixed with distance learning on other days.

In San Francisco, where elementary schools began reopening this week, nearly 300 staff members have been given permission to work from home and teach classes via Zoom while students sit in classrooms with laptops and headphones.

Newsom reiterated Wednesday that his push to get the state’s 6.2 million K-12 public school students back in classrooms was a plea, rather than an order.

When asked if he would mandate reopening, Newsom said “mandates are often not looked upon as favorably as you would like to think. That said, we anticipate and expect our kids back safely in in-person instruction this fall, and you’ll be hearing more about that.”

Reopen California Schools, a parents group formed in June, said Newsom should order schools to reopen as other states have, rather than continuing to cajole schools and unions.

“Newsom cannot continue to pretend his words alone will make a difference. He must mandate all K-12 schools offer real, substantial, full-time, in-person learning now,” the group said in a statement.

Assemblyman Marc Levine, a Democrat who appeared alongside Newsom Wednesday, said there is not consensus in the Democratic-controlled Legislature to force schools to reopen. He said he applauds Newsom’s efforts to coax fuller in-school learning.

Newsom’s urging stands in contrast to the approach several other states have taken to order schools to reopen — including the Democratic-led states of Oregon and Washington — in part because of the outsized political power of California’s teachers unions.

The governor made his frustration clear at having given schools and teachers what they said they needed to reopen. He prioritized educators for vaccinations, and at this point shots have been offered to every educator who wanted one, officials say.

Earlier in the pandemic, money was a huge problem as schools faced enormous expenses to overhaul ventilation systems, reconfigure classrooms and purchase protective gear for teachers and staff.

Newsom signed a $6.6 billion package earlier this year to fund safety measures for in-person instruction and expand learning opportunities. In addition, California schools are getting $15.3 billion in federal aid from the Biden administration.

Newsom pleaded with districts and teachers to “reimagine the school year” for the sake of children.

Even as Newsom called on schools to reopen full time, he acknowledged that there is fear, particularly in the Latino community, which was among the hardest hit by the virus in California. He said instruction online and hybrid models will have to remain an option.

In Los Angeles, the second-largest school district in the nation, recent parent surveys have shown that more than half do not plan to send their children back this spring. About 80% of LA Unified’s 600,000 K-12 students are Latino and many live in low-income neighborhoods that suffered during the height of the pandemic.

Newsom said the consequences of waiting are particularly profound in diverse communities. “And if they need more, let me know what more you need,” he said.

California now has some of the lowest COVID-19 infection rates in the country and a much better understanding than a year ago of how effective masking is in containing the spread of the virus and evidence that children are not key transmitters. 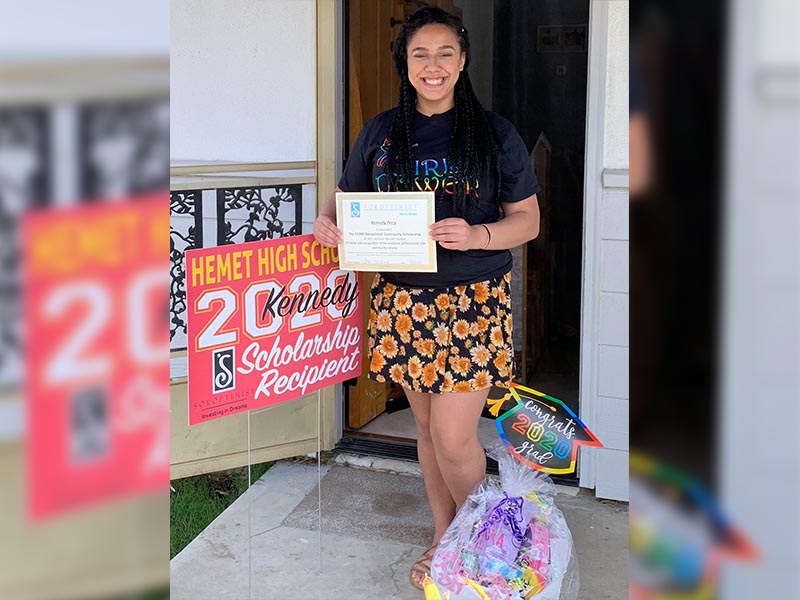 Contributed - July 2, 2020
Four local seniors earned some financial assistance for college because of their dedication to community service. Celina Abushawish, Mariam Mekhael, Kennedy Perry and Diana Sagastume were chosen among 35 applicants to receive scholarships from Soroptimist International of San Jacinto-Hemet Valley, a nonprofit that is a branch of Soroptimist International of the Americas.