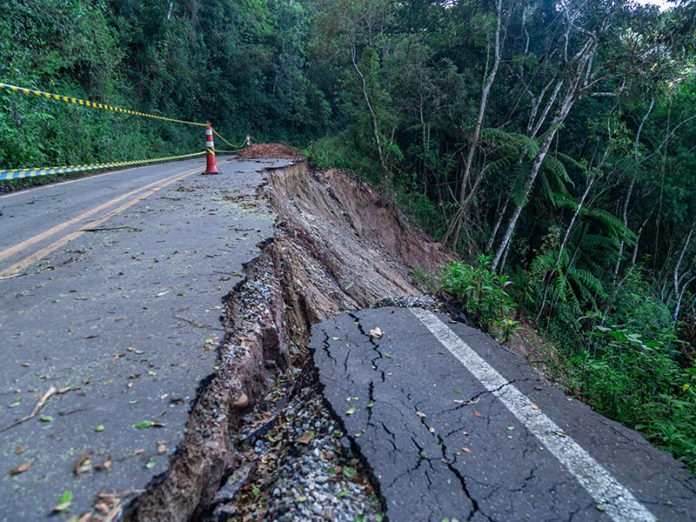 By BRIAN MELLEY and CHRISTOPHER WEBER

LOS ANGELES (AP) — Sinkholes swallowed cars and floodwaters swamped towns and swept away a small boy as California was wracked by more wild winter while the next system in a powerful string of storms loomed on the horizon Tuesday.

Millions of people were still under flood warnings, and more than 200,000 homes and businesses were without power because of heavy rains, hail and landslides. Thousands have been ordered to evacuate their homes.

At least 17 people have died from storms that began late last month, said Wade Crowfoot, the California natural resources secretary. The deaths included a pickup truck driver and motorcyclist killed Tuesday morning when a eucalyptus tree fell on them on Highway 99 in the San Joaquin Valley near Visalia, the California Highway Patrol said.

The storm that began Monday dumped more than a foot of rain at higher elevations in central and Southern California and buried Sierra Nevada ski resorts in more than 5 feet (1.5 meters) of snow.

Residents of the small agricultural community of Planada, which is along a main highway leading to Yosemite National Park, were ordered Tuesday to pack up and leave after Bear Creek overflowed and flooded some homes.

A break in the weather Tuesday on the central coast allowed searchers near San Miguel to look for Kyle Doan, the child who vanished after he and his mother were stranded in a truck in rising waters. His mother was rescued, but Kyle was swept away, and a seven-hour search Monday turned up only one of his Nike shoes.

The wet and blustery weather left California’s large homeless population in a precarious situation. At least one homeless person has died, and more than a dozen people were rescued from a homeless encampment on the Ventura River.

Theo Harris, who has been living on the streets of San Francisco since getting out of jail in 2016, fortified his shelter with tarps and zip ties and took in his girlfriend after her tent flooded.

While the storms have provided much-needed moisture to offset a withering drought, their fury and frequency have created trouble that is expected to last into next week.

The latest atmospheric river — a long plume of moisture stretching out into the Pacific that can drop staggering amounts of rain and snow — began easing in some areas. But flooding and mudslides could follow, even during a brief respite, because the ground remains saturated.

More rain was forecast to arrive Wednesday in Northern California, and then a longer storm system was predicted to last from Friday until Tuesday, Jan. 17.

The weather service issued a flood watch through Tuesday for the entire San Francisco Bay Area, along with the Sacramento Valley and Monterey Bay. Areas hit by wildfires in recent years faced the possibility of mud and debris sliding down bare hillsides.

Forecasters warned that southwestern California could see 60 mph (97 kph) wind gusts at the peak of the storm, and some areas could receive up to half an inch (1.27 centimeters) of rain per hour. Tornadoes that had been forecast never materialized.

In South San Francisco, high winds ripped part of the roof off a large apartment building.

The squalls and flooding have forced school cancellations in some communities and intermittently shut down sections of major roadways that have flooded or been blocked by trees, rocks and landslides.

Sinkholes swallowed up two cars on a Los Angeles street, trapping two motorists who were rescued, and damaged 15 homes in the rural Santa Barbara County community of Orcutt.

In the wealthy seaside community of Montecito, 80 miles (128 kilometers) northwest of Los Angeles, evacuation orders were lifted Tuesday for about 10,000 people, including Prince Harry, Oprah Winfrey and other celebrities. The community had been told to evacuate on the fifth anniversary of a mudslide that killed 23 people and destroyed more than 100 homes.