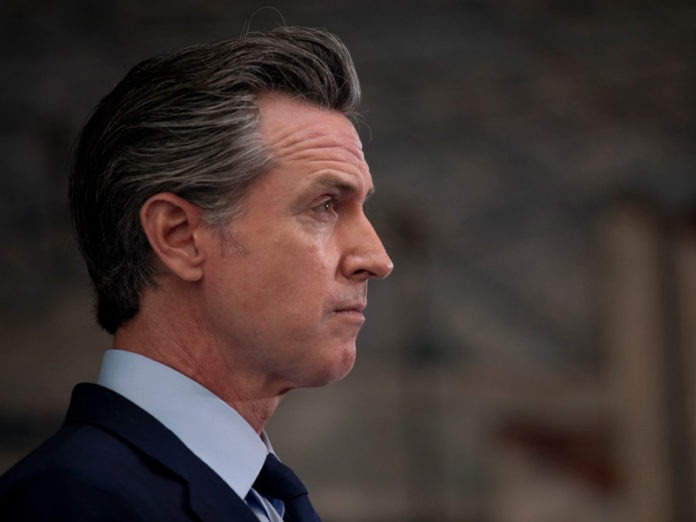 During a “Recall Gavin Newsom” rally in San Rafael, CA, a knife-wielding Newsom supporter and liberal extremist stabbed a recall supporter, knocking him to the ground and fracturing his skull.

59-year old Chris Carpinello was the victim of the attack and was rushed to Marin County General Hospital, suffering a slash injury and a concussion after he was slammed to the ground. It was later revealed that Carpinello fractured his skull and broke his jaw.

Liberal extremists are hunting down conservatives and the media is nowhere to be seen.

“This attack on our free speech rights by Newsom supporters is typical of the way Democrats in California operate. But physical attacks on us won’t stop us from Recalling Gavin Newsom. He needs to go now”, said local organizer Tief Gibbs.

“We are praying for our friends who were senselessly attacked in broad daylight. We won’t back down,” Gibbs continued.

Gibbs says after the man started destroying the signs, one of the demonstrators confronted him trying to get him to stop.

“The assailant came towards him and pushed him back and started punching him,” she said.

Following the attack, the knife-wielding man fled on foot — leaving his victim to be transported to the hospital, where another group member says he was diagnosed with a fractured skull and broken jaw.

While the incident has angered the rally goers, Gibbs says the attack is nothing new.

“We’re in a situation here where freedom of speech is in danger,” Gibbs said.

Many here say it’s just another example of the kind of anger that’s been directed at pro-recall demonstrators, and point to a separate incident last week where a woman threw an egg at leading GOP contender Larry Elder.

As for the suspect, San Rafael police say he potentially faces charges of assault with a deadly weapon. However, he has not yet been caught.