They’ve been here before – we have joined the public in lauding the event coming to our valley. And now THEY’RE BACK!

Wrestling will once again be the big attraction at Hemet’s Wheelhouse on Sunday, May 15th. The matches will occur in the westside outdoor arena, starting at 4 PM. Last year’s attendance is solid proof that wrestling is family entertainment. The event drew a full house – something that doesn’t happen every day in Hemet. This year’s matches are entitled, “Like No Other” and will feature the new West Coast Heavyweight Champion, Brandon Gatson. Gatson will be making his first title defense against former champion, Ric Ellis. The event will be contested in a 30-minute Iron Man Match. The first pinfalls or submissions in 30 minutes will decide the winner.

The Wildcard Championship will be defended as champion Manny Mars takes on Richie Slade.

The Wheelhouse is proud to have the Westcoast Wrestling Company back again. Genial owner Jesse Vivanco said, “It is our desire to bring the best forms of entertainment to the valley, not only in the Rink and Patio areas but also at the Derby Bar and Grill. Our Thursday and Sunday karaoke sessions offer amateurs and professionals to exercise their vocal cords. Our comedy shows play to packed houses as do our musical entertainment for young and old (and in between). For further information, call 951-652-9968 or stop by the rink at 2860 West Florida Avenue in Hemet. Just sayin’ 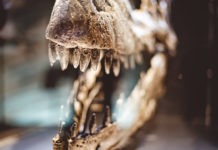 76 million-year-old dinosaur skeleton to be auctioned in NYC

Flea Control With Cats and Dogs

Contributed - August 23, 2019
Fleas are the most common external parasite of pets in North America. Fleas are small wingless insects that use their specialized mouth to pierce the skin and siphon blood from their host. When a flea bites, it injects a small amount of saliva into the skin to prevent the blood from coagulating.