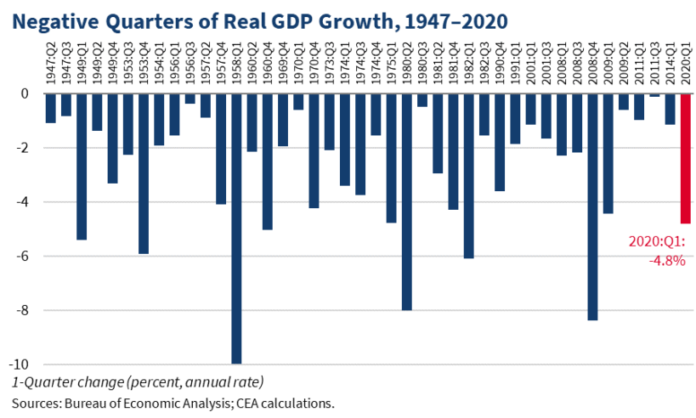 This release confirms that COVID-19’s unprecedented adverse shock to the economy brought an end to the longest economic expansion in U.S. history. Consumer spending declined sharply, contributing -5.3 percentage points to the first quarter’s contraction. This rapid shift in consumer spending shows that Americans are dramatically curtailing expenditures as the Nation responds to COVID-19. But just as consumers cutting back drove the first quarter’s GDP decline, they will also contribute to the economic recovery—showing the importance of policies that support American workers and businesses.

This drop in GDP serves as an early indicator of the costs of the American and global economies shutting down in response to COVID-19. To put a 4.8 percent contraction in perspective, the figure below plots quarters with negative annual GDP declines since the series began in 1947.

Consumers also sharply curtailed spending on durable goods, which contributed -1.2 percentage points to overall GDP growth. Annualized declines in household spending on motor vehicles and parts (-33.2 percent) and furnishings and household equipment (-6.4 percent) were particularly steep. The declines in both services and durable goods spending were partially offset by growth in spending on nondurable goods, which was entirely driven by the largest ever quarterly surge in consumer spending on at-home food and beverages (25.1 percent). Given COVID-19’s risks, it is not surprising that these spending patterns were observed.

Despite the major challenges posed by COVID-19, the United States is in a strong position to recover as the public health threat recedes. Prior to COVID-19’s spread, GDP and job growth were exceeding pre-2016 election expectations, the strong job market was pulling Americans off the labor market’s sidelines, measures of business and consumer optimism were at or near historic highs, and wages were rising—especially for lower-income Americans. Furthermore, among G7 countries, the United States had the strongest real GDP growth from the fourth quarter of 2016 to the fourth quarter of 2019. Over that period, the U.S. rate of growth was more than a full percentage point above the other G7 countries’ average.

While a sharp decline in household spending takes a toll on the economy, consumers can also respond to positive economic changes as they respond to public health risks. Last year, when consumer confidence reached a 20-year high, elevated consumer spending accounted for roughly 80 percent of real GDP growth. The potential for and necessity of a strong rebound is one reason why the Trump Administration has worked with Congress to keep people attached to their work, and enacted financial supports for those who lost their jobs or were temporarily furloughed.

COVID-19 has also led to a whole-of-government response to bridge the current gap between a historically strong economy and the coming economic recovery. Federal policies that support workers and job creators should help limit negative effects on the economy in the second quarter as States restart their economies and let their residents return safely to work. 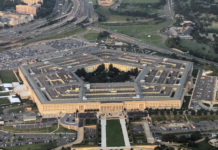 Pentagon debuts its new stealth bomber, the B-21 Raider

Associated Press - June 28, 2022
In a reversal for President Joe Biden, a federal appeals court in New Orleans on Monday agreed to reconsider its own April ruling that allowed the administration to require federal employees to be vaccinated against COVID-19.