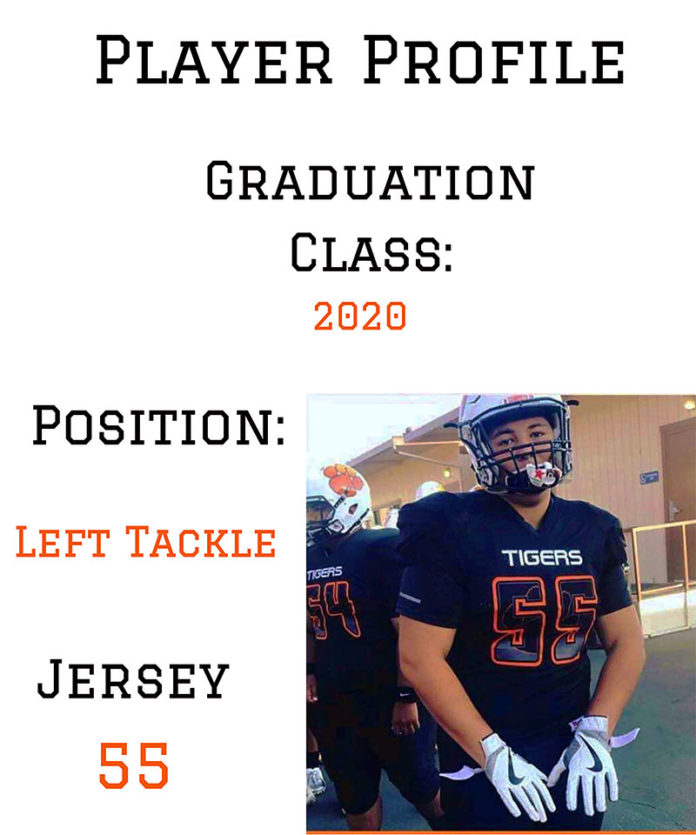 Arturo Ojden Jr also known as AJ, is the Left Tackle at San Jacinto. He is entering his senior year and is a dual-sport athlete. He plays Varsity football and competes on the varsity wrestling team as a heavyweight. AJ has been playing football for seven years and has loved every minute of it. He especially loves that he gets to be as aggressive as he wants and never backs down from anyone. The teamwork and bonding are important to him too. Aj comes from a big family and loves the sense of brotherhood the football team gives him. AJ dreams of going to Luther College in Iowa and wants to major in history. He eventually wants to come back to San Jacinto High School and be a History Teacher. As well as being a history teacher, AJ would love to become the Varsity Wrestling Coach when he makes his return to SJHS.

AJ is Bi-lingual and loves to sing Corrido music, which is a type of Mexican music that usually tells a story to the listeners. His favorite artist is Chalino Sanchez and loves to sing his songs. He considers himself one os Chalino’s biggest fans. It’s something that not too many people know about AJ, but he doesn’t hide it. He has a passion for his music.

AJ looks up to his mom for everything she does for the family; she works a job, runs the household, and takes care of everyone’s needs. “Anything anyone needs she takes care of it, she is the biggest team player I know,” AJ said about his mom. He says his family is super competitive and is always trying to one-up each other. His mom even gets involved in family basketball games; AJ said she is a lockdown defender who plays solid defense against his younger brother, who is a fantastic basketball player.

AJ has two younger brothers, four younger sisters, and one older sister. He considers them a tight-knit family and wants to be a great role model for them. He wants to show his younger siblings if you work hard, you can achieve your goals. He prides himself on being a great role model to them and tries his best to stay out of trouble so that they don’t see him messing up. He is doing that by playing multiple sports, trying his hardest in school, and planning on attending college full-time next year.

AJ is on the left side of the line this year; it will be his number one goal to protect Kajiya’s blindside. Other than that he will open up running lanes for his team and make sure there are holes for the running backs to get through.