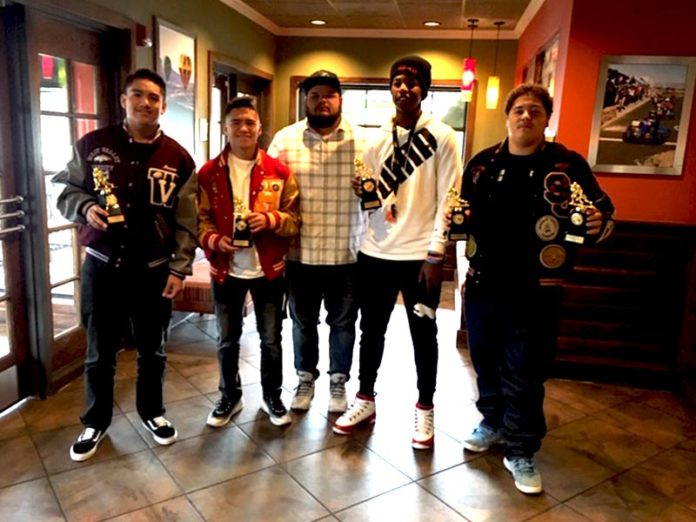 Awards Breakfast a great start to a  new tradition

A capacity crowd joined the Hemet-San Jacinto Chronicle staff to celebrate the first annual HSJ Chronicle Sports Awards.  This year’s awards focused solely on football, but an expanded banquet is planned for next year.

The five awards went to:

These banquets can sometimes hit snags, but the Applebee’s staff was perfect and the event was a complete success. This could not have happened without the help of Kitchen Manager Jennifer Trabucco and wait-staff Jesus Betancourt and Carlos Zambrano.  Applebee’s Manager Melissa Silva could not have been more helpful giving her assistance, time and talent in allowing the Chronicle to host our first awards breakfast banquet. Applebees holds many of these community-support, fund-raising, charitable breakfasts, and the Hemet San Jacinto Chronicle thanks Melissa and the entire staff of Applebee’s.

The HSJ Chronicle’s senior writer, Ray “Rusty” Strait, and our senior sports writer and owner of IEsportsconnection.com, Kyle Headlee were on hand, as Kyle spoke and handed out the awards.  You could see a real bond between our sports writer and the students and staff of the schools.

We received many emails and calls about this first awards banquet. Many questioned why we focused solely on football, and some asked if we were going to include girl’s sports next year.

As we said earlier in this article, the Chronicle will be expanding our awards banquet next year: we will be including both male and female sports and the banquet and awards ceremony will be expanded to the Applebee’s bar and dining room. Our plan is to include at least 6 sports. We would appreciate your feedback which will help us plan next year’s banquet.

For more info on the HSJ Chronicle 2019 Sports Awards, please see Kyle Headlee’s article in the sports section, section B

Rusty Strait - January 16, 2020
Since began my series of "PROFILES IN SERVICE"series, I have had the privilege of speaking with some remarkable women in the valley

Susan Beckett - January 23, 2020
At this point in the year you may be thinking it’s too late to make a new resolution — January 1st has passed you by and left you in the dust