On September 23, 2020, the Moreno Valley Sheriff’s Station Investigations Bureau began an investigation into allegations of child abuse and child molestation. After a month-long investigation, and based on evidence collected and analyzed, the suspect was identified as Jesus Alfredo Mejia, a 33-year-old resident of Moreno Valley.

Investigators and deputies arrested Mejia at a residence in Moreno Valley. Mejia was processed at the Moreno Valley Sheriff’s Station and subsequently booked into the Robert Presley Detention Center for multiple counts of Sexual Assault with a Child, Sexual Penetration with a Foreign Object, Continual Sexual Abuse of a Child, Oral Copulation, Incest, Possession of Child Pornography and Furnishing of a Controlled Substance to a Child. His bail was set at $2,000,000.

The Moreno Valley Sheriff’s Station will be vigilant in investigating all crimes.  Anyone with additional information regarding this incident is encouraged to call Investigator Theodore Allen at 951-486-6700. The Riverside County Sheriff’s Department would like to remind all citizens to be aware of their surroundings at all times and report any suspicious activity, including any vehicles or persons by calling 911 for emergencies, or calling our dispatch center non-emergency line at (951) 776-1099. 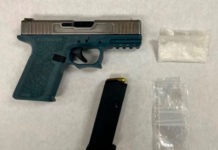 Contributed - August 10, 2022
On August 8, 2022, at about 2:10 p.m., deputies assigned to the Perris Sheriff’s Station were dispatched to a report of a victim of a shooting in the 24300 block of Gunther Ln., Romoland. Upon arrival, deputies found a male victim on the property suffering from a gunshot wound.

Contributed - February 17, 2022
On February 11, 2022 at 1:00 p.m., members of the Murrieta/Temecula Regional Gang Task Force (Region 4) served a search warrant at a residence in the 26100 block of Truelson Avenue in the unincorporated area of Hemet.