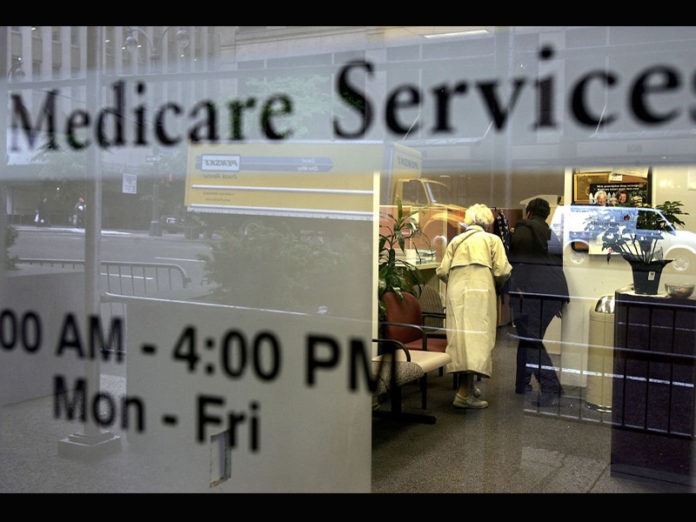 In late July, sponsored content appeared sandwiched between paragraphs of legitimate journalism in Politico Pulse, the outlet’s daily health care newsletter. Humana, the country’s second-largest seller of Medicare Advantage (MA) plans, told readers that “with Medicare Advantage, seniors save an average of $1,640 in annual out-of-pocket spending compared to fee-for-service Medicare.” Humana added that it was “committed to affordable quality care,” echoing that shopworn slogan from the marketing pitch used to sell Obamacare in 2009.

Humana also referred readers, who undoubtedly include Congressional staffers and possibly their bosses, to a report from the Better Medicare Alliance, an industry-financed lobbying group for MA plans, released earlier this year. The report, the “2021 State of Medicare Advantage,” predictably lauded these plans, noting that 98% of beneficiaries were satisfied with their coverage; 97% were “specifically satisfied” with their network of physicians, hospitals, and specialists; and that “Medicare Advantage’s overall satisfaction rate rises to 99% among minority beneficiaries.” The lobbying group also applauded 70 members of Congress from both sides of the aisle who had sent a letter to the Secretary of Health and Human Services in support of MA plans. The group then took to Twitter to single out individual members of Congress such as Alabama Rep. Terri Sewell, thanking her for co-signing the letter and for “expressing strong support for Medicare Advantage.” Such gestures are like valentines, a lobbyist once told me, to flatter legislators into supporting a group’s agenda.

Flattery seems to have worked! Congress has given Medicare Advantage plans every advantage over traditional Medicare in an ongoing effort to diminish that program in favor of a privatized version of Medicare. The underlying goal, I have long argued, is to shift more of the cost of medical care to seniors themselves, relieving the financial pressure on the federal government to pay for their health needs. Over the years, the government has overpaid Medicare Advantage plans to encourage their growth. In addition plans have been able to get more money by overstating the severity of their beneficiaries’ illnesses.

All this money has enabled Medicare Advantage plans to entice new members with goodies like dental, vision, and hearing benefits, free transportation to doctors’ offices, and two weeks of meals after a hospital stay. MA plans are allowed to offer those benefits, which the traditional Medicare program and Medigap policies that accompany it usually do not offer. With such a government-sanctioned edge, no wonder MA plans have been able to bring 42% of the Medicare population into their fold.

There’s a dark side, though, to the rising popularity of Medicare Advantage plans, which the public does not see, since the media has largely taken a pass on covering the story. Academic research, however, is beginning to reveal that thousands of Medicare beneficiaries, taken in by over-the-top poll results from the Better Medicare Alliance and ubiquitous TV commercials featuring Joe Namath may not be so delighted with their plans after all. People are enticed by cheaper premiums and lots of benefits, but they often don’t go beyond the premiums to understand how the plans’ cost-sharing and provider networks really work.

“These findings suggest that Medicare Advantage members in rural areas are experiencing limited access to care,” Sungchul Park, an assistant professor at Drexel’s Dornsife School of Public Health, told me. “They may realize that staying in an Advantage plan is not good for them, and they switch.”

In March, the policy journal Health Affairs published a significant study that offers strong warnings for Medicare Advantage members, particularly those living in rural areas. The study found that while switching from traditional Medicare to MA plans was not common for beneficiaries in either rural or urban areas, those living in rural areas were twice as likely (10.5%) to leave an MA plan as people who live in urban or suburban areas (5%). In other words, more beneficiaries who had chosen Advantage plans in rural areas were dissatisfied with their coverage. About one-fifth of beneficiaries in rural areas who were dissatisfied with the ease of getting to their doctor or getting care at the same location switched to traditional Medicare.

“These findings suggest that Medicare Advantage members in rural areas are experiencing limited access to care,” Sungchul Park, an assistant professor in the department of health management and policy at Drexel’s Dornsife School of Public Health and the lead study author, told me. “They may realize that staying in an Advantage plan is not good for them, and they switch.”

“If you’re living in an area with few providers to begin with, you might have access to an even smaller number of providers in your network,” said David Meyers, an assistant professor of health services policy and practice at Brown University and another of the study’s authors.

What makes these results even more noteworthy is that so many rural beneficiaries were willing to leave their Advantage plans even though most of them can’t buy a supplemental insurance (Medigap) policy to fill in traditional Medicare’s coverage gaps. Many seniors have health problems that make them uninsurable at this point. But without a Medigap policy, they must pay the 20% of a bill that Medicare does not pay. People in traditional Medicare usually buy Medigap policies, which cover things like coinsurance, copayments and deductibles, when they first become eligible for Medicare. Depending on which of the 10 standardized Medigap plans they buy, they may have negligible out-of-pocket expenses. However, only four states — New York, Connecticut, Maine, and Massachusetts — allow people to return to traditional Medicare and buy a Medigap policy without an insurer taking into consideration their health after their initial enrollment period. That makes it more likely in other states for an insurer to deny someone a Medigap plan — coverage is not guaranteed. But staying in an MA plan may mean they cannot access certain doctors to treat their condition. They’re stuck in a bind.

Meyers and his colleagues have recently published other studies, which raise more questions about the care minorities receive in Medicare Advantage plans. In January, one study published in the Journal of General Internal Medicine found that MA plans with higher premiums, higher enrollment, and higher market share tended to have wider networks. The study also found “substantial racial/ethnic disparities in access to wider MA networks when it came to primary care, psychiatry, and mental and behavioral health” care for Hispanic and Asian beneficiaries. This June, another Health Affairs study found that as of 2018, 47% of Hispanics, and 37% of Blacks were in MA plans, compared to 26% of whites. The study concluded that the biggest increases in MA enrollment were among Black enrollees and those who lived in the poorest neighborhoods.

There’s a dark side, though, to the rising popularity of Medicare Advantage plans, which the public does not see, since the media has largely taken a pass on covering the story.

“Racial and ethnic minorities tend to concentrate in specific plans that may be lower in quality than the plans white beneficiaries are enrolling in,” Meyers said. “Hispanic and Black beneficiaries also tend to enroll in low-premium plans, and we’ve found lower premiums may be associated with narrower networks.” Meyers added that it’s well-established by existing research that Black and Hispanic enrollees experience poorer outcomes in the Medicare Advantage program than white enrollees.

Given such findings and the zeitgeist of the moment, it is disappointing to see the media take a pass reporting on Meyers’ research, which is significant for millions of Americans of color and those living in rural areas. That’s hardly surprising, since as I have pointed out in this space, journalists barely cover Medicare these days, despite its importance to so many Americans. The Health Affairs press office picked up only 12 stories about its March report on rural Americans leaving MA plans. All appeared in trade or health-related news outlets. It picked up only five stories — four in the trade press and one in a fitness magazine — discussing the findings of the Health Affairs study published in June. The AARP Bulletin, which reaches 35 million readers, including those in rural areas heavily targeted by Medicare Advantage sellers, did not run a story about Meyer’s findings, according to an AARP spokesperson.

So where can journalists, people on Medicare, and those about to join actually learn objectively what their options are? The best source of such information about the limitations of Medicare Advantage plans Meyers and his colleagues have pointed out is their State Health Insurance Assistance Program, or SHIP, for short. The SHIPs were set up by Congress in 1990 to help Medicare beneficiaries, who were confronting a confusing marketplace long before there were Advantage plans.

I called three SHIP programs in rural states asking about options for a hypothetical relative. They all suggested the person make an appointment to see a counselor, but gave me a bit of information when I asked about ease of seeing physicians. In Indiana, a counselor said a doctor can leave an Advantage plan “for any reason they see fit. It’s definitely not uncommon.” A North Dakota counselor noted, “there aren’t a lot of doctors in rural areas, and they (people) have to travel to bigger areas. Original Medicare might be a better option because it is accepted nationwide. It’s more broad.” In Georgia, a counselor advised, “Each option works for some, but it doesn’t work for others.”

This spring a rare and excellent Medicare story appeared, this one in Kaiser Health News and picked up by some of Kaiser’s media partners. Fred Schulte reported that Humana had overcharged Florida seniors on Medicare nearly $200 million in 2015 by overstating how sick they were. The Health and Human Services Office of the Inspector General said this would be “by far the largest” audit penalty ever imposed on a Medicare Advantage company if finalized. Humana told KHN it disputed the findings. I sent an email to the company asking for an update and Humana did not respond to the request. Schulte is a veteran journalist who has covered this issue for years and is one of the rare reporters to write critically about Medicare Advantage plans, let alone cover Medicare in the first place. He reported that despite their popularity, MA plans have been the target of many government investigations, Medicare audits, and Department of Justice and whistleblower lawsuits.

Schulte’s dogged pursuit of Advantage plan overcharges and the health researchers’ findings about network shortcomings in rural areas and for Americans of color should be reason enough to revive media interest on this neglected beat. You can bet when Joe Namath is back in the fall hawking Medicare Advantage plans, he won’t be talking about narrow networks, lack of access to doctors, or overcharging the government. But someone should.

Hospitals run low on nurses as they get swamped with COVID

Associated Press - August 11, 2021
The rapidly escalating surge in COVID-19 infections across the U.S. has caused a shortage of nurses and other front-line staff in virus hot spots that can no longer keep up with the flood of unvaccinated patients and are losing workers to burnout and lucrative out-of-state temporary gigs.

Podcast explores the dark history of mental illness in California and...

Contributed - March 6, 2022
The evening that cemented my relationship with my collaborator, Jenny Johnson, involved a Manhattan in a waterfront bar, a deafening tuba solo, and my attempt to take a call from a now-disgraced former sheriff while Jenny tried to stop herself from laughing.