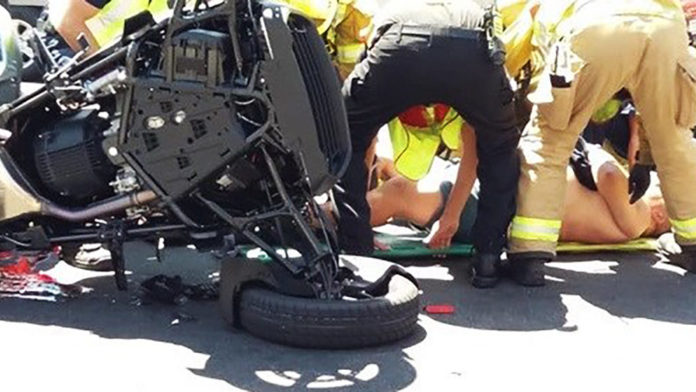 Authorities are investigating the cause of a two-vehicle collision that hospitalized a motorcyclist with serious injuries this morning, Saturday, July 27. The major injury crash happened on Florida Ave., between Harvard and State streets.

City of Hemet Police and Fire Departments, along with AMR and other emergency personnel, were dispatched to the crash around 11:30 a.m. 911 callers reported a motorcyclist involved in the collision was ejected from his three-wheeled motorcycle and possibly trapped under a commercial van.
Officials began arriving at the scene within minutes of the dispatched call and found a white Dodge commercial van operated by a Pugs Sunglasses representative and a silver, three-wheeled, CanAm Spyder motorcycle, in the westbound lanes of traffic on Florida Ave. The two vehicles were blocking the westbound lanes of Florida Ave., in front of Shooters Bar and Grill.

Numerous witnesses and good Samaritans had stopped at the scene and were providing aid and comfort to the downed rider, while keeping the other involved driver calm.
Rescue personnel found the motorcyclist stuck under the front of the van, pinned between grill of the commercial vehicle and his three-wheeled motorcycle, according to witnesses.
The rider had sustained severe trauma and was bleeding profusely from a serious injury to his right leg and paramedics immediately began evaluating and treating the seriously injured man. He was eventually rushed to an area hospital for further treatment and his current condition was not available as of this publication.

While working at the scene, officials called for the temporary closure of westbound Florida Ave. and all traffic was diverted away from the accident scene.
Hemet PD is investigating the cause of the crash and their investigation is ongoing at the scene. Officials have asked for area residents to seek alternate routes until their crash investigation is completed.