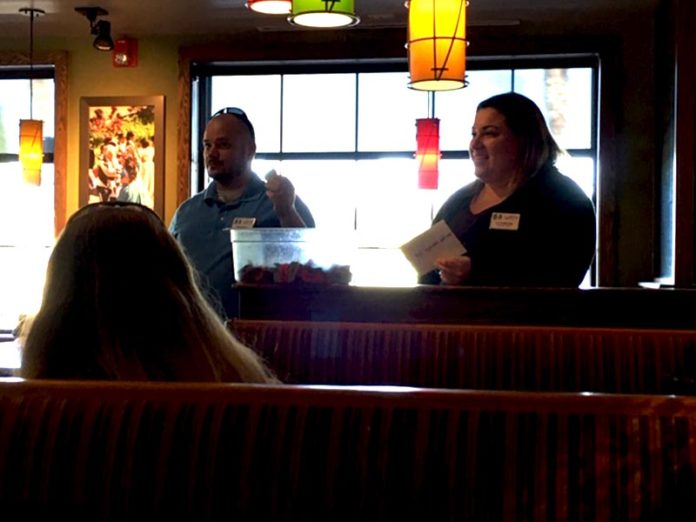 The Valley Community Pantry (VCP) held its quarterly pancake breakfast at Applebee’s to capacity crowds, which came and went filling the dining hall several times this past Saturday, November 23.

Jim Lineberger, Executive Director/CEO of VCP echoed captain Brock’s sentiments, saying, “In America, everybody deserves to eat: our particular constituency comes from three main groups: the elderly, our veterans, which are sometimes one-and-the-same, and single mothers. Of course, we will feed anyone who is hungry, but the overwhelming majority of our clients, some 97, 98 percent, come from those three groups. This event gets better and better every time, because we have more than 70 volunteers who help make it better and better.”

Capacity crowds were treated to the usual delicious morning fare provided by Applebee’s, and all of it for a worthy cause. Due to the fact that so many of the needy are not only elderly but veterans, Sandy Dee, a veteran herself, as well as columnist for HSJ Chronicle (“A voice for vets”), and founder of, “A Pawsibility for veterans” (apawsibility4veterans.org), and Board Member of the Cloverlane Foundation (cloverlanefoundation.org), championed the event saying, “This is an incredibly well-orchestrated event for bringing the community together and to help fund this great organization which provides food for the community and for over 200 veterans.”

The event raised more than $1,200-an amazing amount for an event such as this-and the event drew community servants past and present such as Russ Brown and former Mayor Robin Lowe who was among the lucky prize-winners of the VCP raffle.

Liz Dubruille, Vice President of VCP was very happy with the turnout. “We try to hold this particular fundraiser two or three times a year: we try and do it quarterly if we can. Applebee’s always goes all out, and it gets better and better every time. It’s always a huge blast.”

If you call VCP you will hear Executive DirectorJim Lineberger mention the VCP motto which is, “Giving hope, helping families, and blessing lives.” If Saturday’s turnout was any indication, The Valley Community Pantry is living up to that motto

Search: Serving up thanks

Contributed - March 6, 2022
We should not be surprised that a sixteen-year-old Black girl was thrown to the ground like a full-grown man by two Rialto police officers for allegedly riding a mini-bike at a high rate of speed through a residential neighborhood.