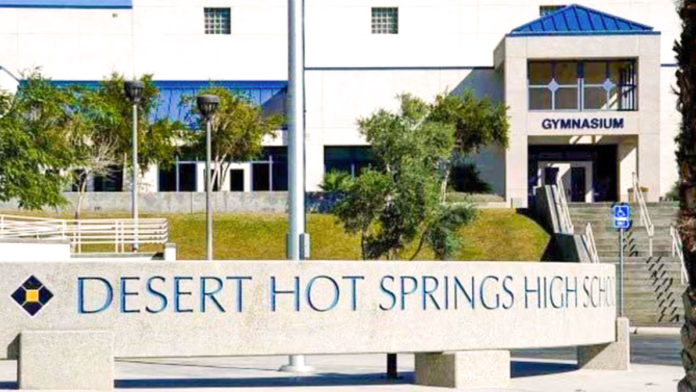 DESERT HOT SPRINGS (CNS) – Police seized two handguns and a replica
assault weapon from three Desert Hot Springs High School students who were
arrested for allegedly threatening violence against the school on social media,
authorities said today.
Two boys and girl, all 14 years old, were arrested Sunday after a staff member from a nearby middle school reported the social media post to school administrators, who alerted police.
The suspects, who have not been named because they are minors, were booked Sunday night into juvenile hall on suspicion of terrorist threats, according to the Desert Hot Springs Police Department.
During their investigation, officers seized a revolver, a semi-automatic Glock handgun and a replica AR-15 pellet gun, according to police.
The imitation firearm did not have a red tip to distinguish it from a real gun, DHSPD Detective Larry Gaines said during a news conference.
“If officers encounter this at a school, out on the street, if someone jumps out of a car and points it at an officer, all I have to say is there’s a high probability that a deadly confrontation is probably going to happen. There’s no way to tell if this is a fake weapon until actually having it inside your hands,” Gaines said.
In light of the arrests, the school has bolstered its campus security and police have increased their presence around the campus, but there are no threats to public safety and no suspects are outstanding, authorities said.
In recent years, students and staff at the school have been given identification badges as a way to enhance security, said Palm Springs Unified School District spokeswoman Joan Boiko. Random metal detector searches are also
periodically conducted.
“As a parent with kids at this high school, I understand the fear
that many in our community will have hearing something this. Kiss your kids,
give them a hug. This was thwarted. Nothing happened because of somebody moving
forward and saying something,” said Desert Hot Springs Assistant City Manager
Doria Wilms.
Police said they do not yet have a motive for the alleged threat, and
the suspects did not have a history of behavioral issues, according to Boiko.
Investigators have not determined how the trio obtained the weapons.

Visit your latest news by going to HSJC