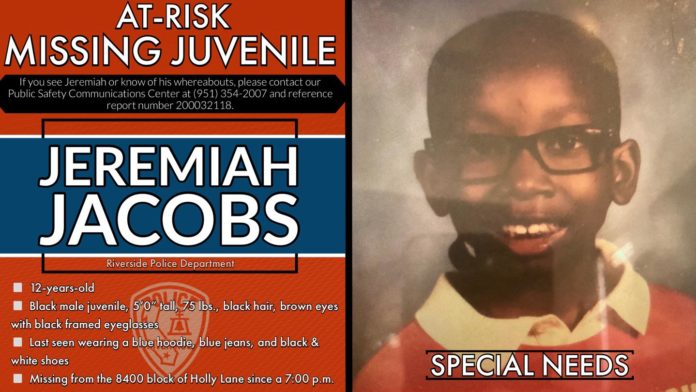 UPDATE: Jeremiah has been found safe by a detective with the Riverside Police Department. Police say he will be reunited with family members. The previous story is below.Authorities are seeking the public’s help in finding an at-risk 12-year-old boy with special needs who went missing in Riverside.

Jeremiah Jacobs went missing Sunday evening from the 8400 block of Holly Lane, according to the Riverside Police Department.Officers canvassed the area with a bloodhound search team after receiving several calls that Jacobs was spotted in the area of Garfield and Monroe Street but have not found him as of Monday morning.

The department says Jacobs has a speech impediment but should answer to his name.Jacobs is described as 5 feet tall with black hair, brown eyes with black-framed glasses. He was last seen wearing a blue hoodie, blue jeans and black and white shoes.Anyone who has information about the boy‘s whereabouts are urged to contact the Public Safety Communications Center at (951) 354-2007 and reference his name or report number: 200032118.

Contributed - July 25, 2022
At 1:51am, deputies from the Thermal Sheriff’s Station responded to the report of a large party in the area of Las Lunas Avenue and Mesa Court in Coachella. While in the area, deputies heard the sound of gunshots and were contacted by two victims that were struck by gunfire.

Assault with a Deadly Weapon

Contributed - November 10, 2021
On Monday, November 8th, 2021 at 12:40 P.M., Deputies from the Riverside County Sheriff’s Department, Perris Station, responded to the 17100 block of Hidalgo Dr. in the unincorporated area of Perris regarding a report of an assault with a deadly weapon. Deputies responded and located a victim with a moderate arm injury as a result of being struck with a machete.