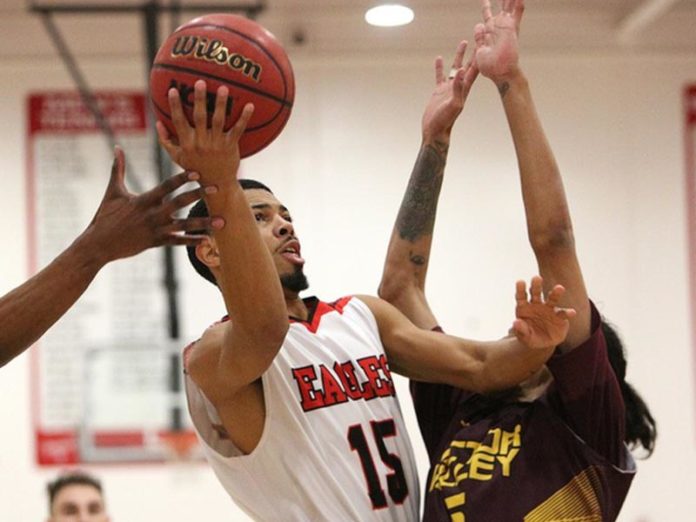 Jamaal Barnes, a freshman from Bonita High School, who was the Eagles leading scoring during the season was named to the league’s First Team. Barnes averaged an impressive 18.5 points per game for the season and boosted that all the way up to 24.3 points per contest in the conference games. Barnes scored in double figures in all 16 on the Eagles conference games and scored over 20 in 13 of the 16 league match-ups, he had a season high 41 on January 15th in a win over College of the Desert. Barnes also averaged over 5 rebounds a game.

Lenzell Simmons, a sophomore from Riverside Poly, earned second team all-conference honors. Simmons averaged 12.2 points per game over the entire regular season and 11.7 during IEAC action. Simmons recorded a career best 30 points on December 18th against Copper Mountain in the team’s league opener, he also had conference games of 27,26, and 25 points.

Sophomore Kamien Cederlind, Temecula Valley HS, and freshman Mekhi Hill from Vista Murrieta High both earned Honorable Mention all-conference nods. Cederlind averaged 11.5 points per game during conference play and shot a school record 48.8 percent from three point range throughout the season making 59 of 121 long range attempts. Cederlind saved his career high for the final night of the regular season when he scored 27 points against San Bernardino Valley. Hill was the Eagles defensive stopper during the season as well as averaging 8.2 points and 5 rebounds a game in the IEAC.