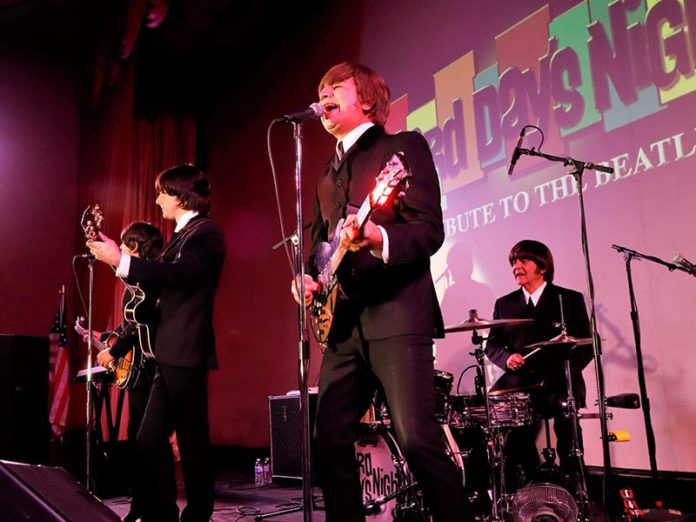 “Best concert EVER!” is a phrase that is often heard following a performance at the Historic Hemet Theatre. And Saturday, October 12th was no exception, the street filling with smiling fans — many still singing their favorite tune.

That was the night that “Hard Day’s Night” was in town performing Southern California’s favorite tribute to The Beatles before a packed auditorium.

For the first half of the show, the band dressed in classic black suits as the voice of Ed Sullivan brought back that historic day in 1964 when The Beatles took America by storm. And the crowd responded as they did back then, cheering at the top of their lungs for “The Fab Four.”

After intermission, the audience flashed back to 1967 as the band returned in the colorful suits of the Sgt Pepper’s Lonely Hearts Club Band. Later in the evening, the costumes changed again to reflect the era when the member of the Beatles each gained recognition as solo artists.

This show had one of the biggest audiences of the year — and one of the loudest. Every song had the crowd singing along, each one a step back in time to the 1960s, 70’s or 80’s.

So, which is the “best concert ever?” The answer depends on several factors, including a great tribute band and the energy created by hundreds of cheering fans. But that happens at every HHT show! The key is the music that comes from the decade in which you “came of age” — when music spoke to your soul and impacted your path forward. Which is why at every event there will be someone walking out declaring the show is “the best concert EVER!”

The “Friday Nite Live” concert series also continues with tributes to Reba McEntire (11/8) and Keith Urban (12/13). The last show of the year will be a special holiday concert, “Stone Soul Christmas,” featuring Stone Soul singing some of rock and roll’s favorite holiday classics.

Mike Hiles - August 23, 2019
With help from the Soboba Foundation, the 2019 Tribute Mania Concert Series will enjoy a third season run from September through December. As a Presenting Sponsor, the philanthropic arm of the Soboba Band of Luiseño Indians will help bring some talented tribute bands to the theater at 216 E. Florida Ave. in Hemet.