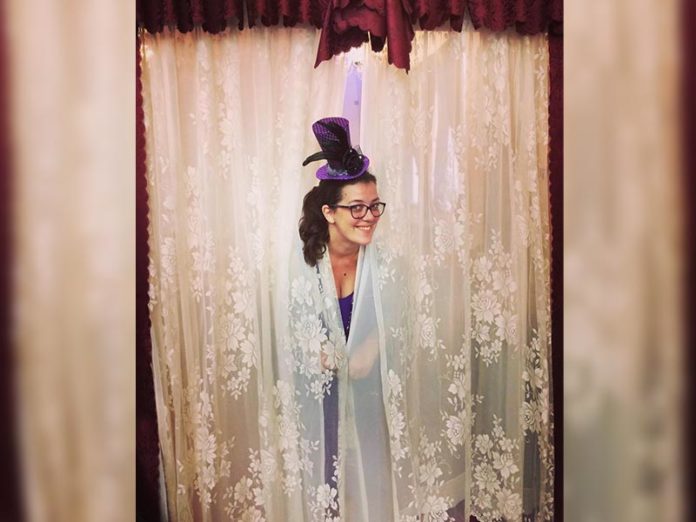 (For this Pastry Chef)

No, she’s not kidding…the name’s on the business card.

“I’ve always wanted to be a pastry chef. When I was four years old I was helping my grandparents bake bread,” (see photo of Mrs. Uhmayzing in this article). “Being a pastry chef is all I’ve ever wanted to do,” says the Santa Ana-born pastry chef adding, “I plan to build a sweet empire.”

And how sweet it is.

If your taste buds have been blessed enough to taste her award-winning cheesecake, or if you’ve ever stopped in at the destination coffee house (where she is in residence as of October 11), or at Harvard Street’s La Boutique (where the “Opera House Tea Room” hosts an afternoon tea), you know that, while the name may seem light-hearted, this young woman is a truly serious pastry chef with talent to spare. “I’ve been blessed to work with at least for James Beard Award winners, including Chuck “Chucky” Dugo of “The Slanted Door,” at San Francisco’s Embarcadero, and Sherry Yard at Spago. I feel Sherry truly molded me…and I also feel that I’m just starting to come into my own as a chef,” says Uhmayzing.

Working her way up from her grandparent’s kitchen, Uhmayzing moved from making lollipops using vintage 1950s molds and selling them for a buck a pop in high school (“I was making $100 a day”), to becoming an apprentice pastry chef at age 16, to graduating from Pasadena’s Le Cordon Bleu at age 19.

“I was going to school for eight hours and driving to Spago Beverly Hills where I interned under Sherry Yard for eight hours a day. It was Sherry who taught me to “work smarter not harder,” which she drilled into the interns. I’m a tall woman, so she made sure to tell me to raise my work space and distribute my weight properly—to lessen the stress on my back. I’ve never forgotten what she taught me,” says Uhmayzing.

From Spago, Uhmayzing worked at two Club Med locations, followed by the Norwegian Cruise Lines, then as Executive Pastry Chef at Highland Springs Resort for the Lavender Festival, then on to Palm Springs to work with Pastry Chef Michael Beckman at “The Workshop,” before settling down, or so she thought: “within a year, I was going crazy because I wanted to keep busy. I wondered how I could balance my love of baking with the challenge of being a new mother. That’s kind of difficult, but I made it happen. Finally my significant other, Jake, begged me to quit—for a while. Within six months of my daughter Luna’s being born, I was “wearing” my baby while I was baking.

Uhmayzing thought she’d just keep her hand in dough while making a few pies: 200 pies later she realized that she had to raise her daughter in the same place she loved as a child: the kitchen. Allysun’s “Madam Confection” was born.

Can one woman with a driving passion to build “a sweet empire” while home-schooling a daughter–continuing to provide the high standards she’s set for herself and her business? I wouldn’t bet my sweet tooth against her.

Allysun can be reached at madamconfection@gmail.com

Search: For this Pastry Chef

LOSS OF A LOVED ONE

Contributed - July 9, 2021
I lost a loved one the other day. No, it was not due to COVID, but he did have some underlying conditions that caused him to deteriorate so suddenly. Technically, I should say that it caused him to fade to black, as the symptoms seemed to indicate.