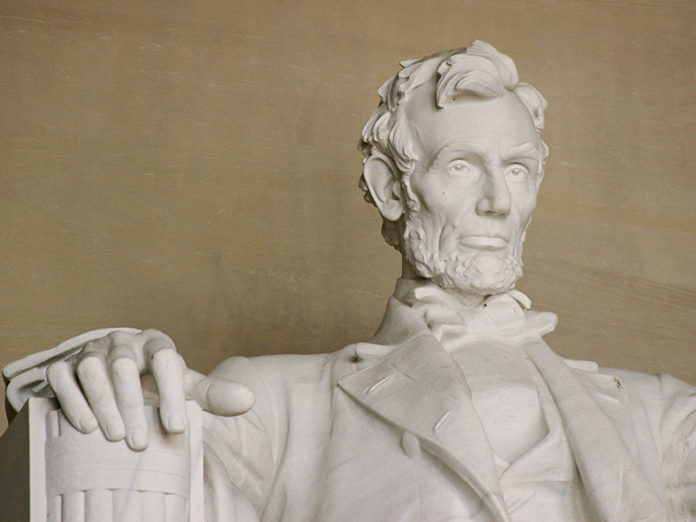 A Bible given to Abraham Lincoln in the final months of the Civil War ties together the 16th president’s budding views on spirituality and his belief that God was calling him to end slavery as well as his widow’s labors to solidify his religious standing, historians say.

The King James Bible was eventually given by Mary Lincoln to Noyes W. Miner, a beloved Springfield neighbor and a Baptist minister whose descendants donated it to the Abraham Lincoln Presidential Library and Museum, which unveiled it to the public on Thursday.

The 18-pound (8-kilogram) volume has a cover of hand-tooled leather and gilt lettering, and is inscribed to the president from “the Ladies of the Citizens Volunteer Hospital of Philadelphia.” Historians believe Lincoln received it on June 16, 1864, the day he visited the city for a fundraiser for the U.S. Sanitary Commission, a private agency that raised money and recruited volunteers to care for the Civil War’s sick and wounded. Lincoln had donated dozens of autographed copies of the Emancipation Proclamation to the cause.

The gift is a boon for the library and museum, which has been beset in recent years by a political battle for control of the institution and its fundraising foundation’s struggle to pay off a debt of $9 million that had gone toward the purchase of Lincoln memorabilia, including a stovepipe hat of dubious authenticity.

State historian Samuel Wheeler said the Bible binds Lincoln’s developing spiritual outlook and reliance on scripture to answer the ghastly questions posed by war with his widow’s efforts after his April 1865 assassination to have him remembered as spiritual rather than as the religious skeptic he had been earlier in life.

“During the Civil War, there is an evolution that takes place in Mr. Lincoln’s religious thoughts. He is searching for God’s purpose. He’s redefining his relationship with his maker, and he’s trying to figure out what is God’s purpose in this war,” Wheeler said. “He believed that God was using him to end American slavery.”

It’s unlikely that Lincoln, who is known to have carried a New Testament and kept handy a daily devotional, used the “presentation” Bible for regular meditation, Wheeler said. But multicolored ribbon markers are distributed throughout the book, which Mary Lincoln told Miner her husband had placed when she gave Miner the book in 1872.

That it ended up in Miner’s hands was likely a strategic, as well as neighborly, move, Wheeler said. Mary Lincoln was outraged when her husband’s former law partner, William Herndon, started noting in essays, lectures and finally a biography that the martyred president was an atheist. Miner was among close friends who expended considerable energy refuting that notion, writing at one point, “I never heard a word fall from his lips that gave me the remotest idea that his mind was ever tinctured with infidel sentiments.”

The Bible was last inherited in 1994 by Miner’s great-great-great-grandson, William Prescott Wolcott of San Francisco. Its power as a tangible link to history was evident in the way an airline employee became teary-eyed while viewing it as it went through a private security screening while en route to Illinois, said Ian Hunt, the institution’s acquisitions chief.

Landing such an intimate Lincoln artifact can help soften the edges of some of the facility’s public-relations struggles, particularly one that technically involves not the library and museum, but its fundraising foundation. The foundation announced last year it must pay off by this fall a $9 million debt from a 2007 loan to buy artifacts or face selling some of the collection. The cause has been hampered by evidence that secret efforts to authenticate a stovepipe hat purportedly belonging to Lincoln failed.

Fallout over that revelation prompted executive director Alan Lowe to sever a consulting contract he had with the foundation. “I hope that people know throughout the nation and the world that we are very dedicated to what we do in terms of preserving the legacy and presenting the legacy of Abraham Lincoln — that we are good custodians of the materials that we oversee, that we take care of them, that we utilize them in the proper ways to teach and to inspire,” Lowe said.

Susan Beckett - October 29, 2021
Many years ago, my sweet daughter Susanne and my hubby Bob got their heads together and made a video for one of Bob’s Sunday sermons. It was called, “Boiled Alive.” And yes, they actually boiled a frog at our kitchen stove - pretend! It’s amazing what you can do when you edit a video these days. The frog was not boiled, as it appeared to be - but you didn’t know that until the out-take where it showed Bob with frog in hand headed back to the pet store. Nevertheless, we got a ton of nasty emails slamming us for boiling Mr. Green Frog in the Beckett kitchen. (This video can still be viewed on youtube.com.)