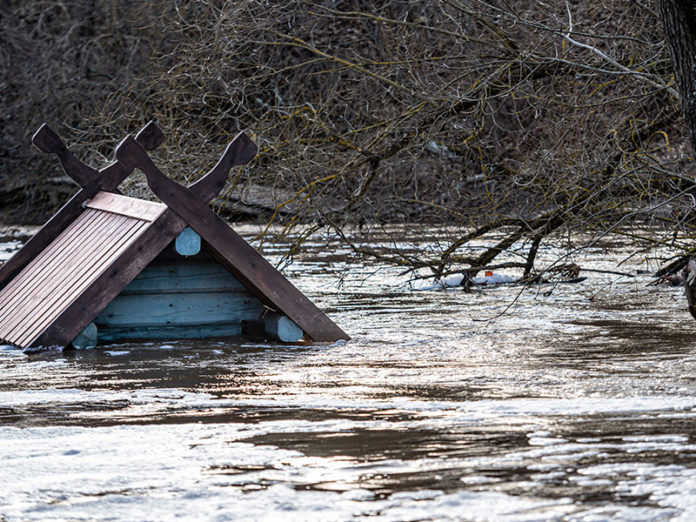 By JOHN ANTCZAK and CHRISTOPHER WEBER

Tallying the damage will take time, but the number of houses and other structures that will be red-tagged as uninhabitable could be in the “low thousands,” said Brian Ferguson, spokesperson for the Governor’s Office of Emergency Services.

The damage is spread across 41 of California’s 58 counties, Ferguson said.

In unincorporated Santa Barbara County, after more than 60 inspections at properties that sustained damage from mudslides and downed trees, four homes were red-tagged and 32 were yellow-tagged as needing extensive repairs, said Kelsey Buttitta, the county’s communications manager.

“Also we’re seeing a lot — a lot — of damage when it comes to roads,” she said, estimating that more than a dozen are fully closed. “Some roads are completely washed away.”

There is no estimated reopening date for State Route 154, a key north-south artery in the county that is inundated with mud and rocks, Buttita said.

Light rain and snow showers lingered Tuesday in some areas across California, but the skies were finally largely clear.

A shot of precipitation from a quick system was predicted for Wednesday or Thursday, followed by a dry period, the National Weather Service said.

Forecasters cautioned that although the midweek rainfall will be light, it could be enough to cause problems because the state is so saturated.

Flood warnings remained in effect for the Salinas River in Monterey County and parts of Mariposa and Merced counties in the Central Valley.

Officials in Ventura County said it could take up to three weeks to clear the only road into the remote canyon community of Matilija in the Los Padres National Forest near Ojai. Repairs could take six months. More than 70 residents were evacuated by helicopter, but a handful have refused to leave, according to the Ventura County Sheriff’s Office.

“Towering piles of rock and mud reach over 40 feet (12 meters) tall in some locations, blocking access to roadways and leaving residents isolated to the canyon,” the sheriff’s office said in a weekend statement.

To the north in Berkeley, eight homes were red-tagged after a sodden hillside collapse Monday, sending mud onto properties, including one belonging to Marjorie Cruz. No injuries were reported.

“You can’t describe what it’s like to wake up in the morning and look outside your door and see this horror come through,” Cruz told NBC Bay Area. “We’ve had enough rain for now and a long time to come.”

The amount of rain and snow across the state has been staggering.

The San Francisco “water year” to date — since Oct. 1, 2022 — has recorded 21.75 inches (55.24 centimeters) of rain, making it the sixth-wettest water year on record, the National Weather Service said.

The amount of water in the snowpack covering the Sierra Nevada and other mountain ranges is more than 250% of normal to date and 124% of the April 1 average, when the pack is normally at its peak, according to the state Department of Water Resources.

President Joe Biden is planning to travel to California’s central coast on Thursday to visit areas that have been devastated by the extreme weather. The White House said in a statement Monday that the president would meet first responders and state and local officials, survey recovery efforts and assess what additional federal support is needed.