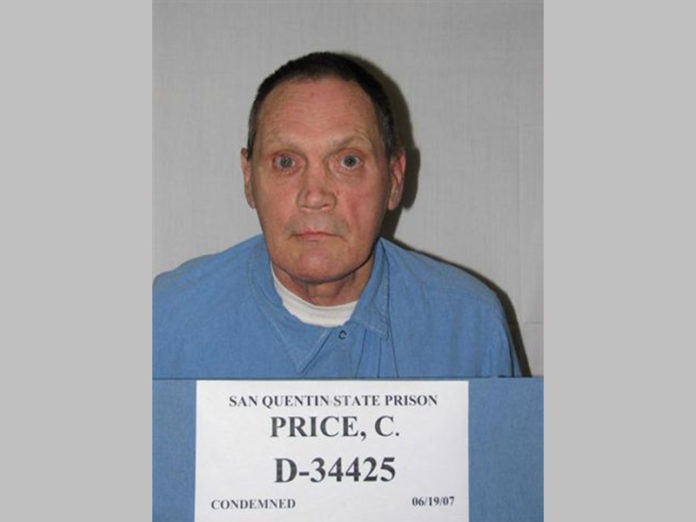 SAN QUENTIN, Calif. (AP) — A California inmate who was convicted of killing two people in 1983 died Tuesday of natural causes while awaiting execution, prison officials said. He was 74.

Curtis Price died Monday at San Quentin State Prison, according to the California Department of Corrections and Rehabilitation.

Price, a member of the Aryan Brotherhood criminal gang, was sentenced to death in 1986 in Humboldt County for killing Richard Barnes and Elizabeth Ann Hickey.

Prosecutors said Barnes was shot in Los Angeles County because he was the father of Steven Barnes, another Aryan Brotherhood member who had testified against other gang members but was in protective custody.

Hickey was beaten to death at a Humboldt County home from which guns had been stolen, authorities said.

Price also was convicted of the armed robbery of a movie theater in Humboldt County the same day that Hickey’s body was discovered.

Last month, another condemned inmate died of natural causes at age 68. Donald R. Millwee was sentenced to death in Riverside County in 1990 for the fatal shooting of his physically disabled mother. He had been housed at a state prison in Corcoran, midway between Bakersfield and Fresno.

There are currently 698 people on California’s death row. The state’s last execution was in 2006. Gov. Gavin Newsom enacted a moratorium on executions in 2019.