INDIO (CNS) – A judge is scheduled to decide today whether a Murrieta
man charged with second-degree murder and drunken driving in a fatal Palm
Springs crash will have to stand trial.
Michael Torrez, 33, is accused of having a .16 blood-alcohol content — double the legal limit — when he crashed into two cars on March 16, 2018, one of which was driven by 25-year-old Palm Springs resident Mario Garcia, who died at the scene. Torrez is scheduled to appear for a preliminary hearing this morning at the Larson Justice Center in Indio.
Torrez was charged in April 2018 with second-degree murder rather than vehicular manslaughter due to a 2008 DUI conviction. Drivers with DUI convictions are warned at sentencing that if they drive under the influence and cause a death, they could face a murder charge.
The 11 p.m. crash began with Torrez allegedly heading westbound on Ramon Road in a pickup truck, “swerving in and out of the lanes at a high rate of speed,” an arrest warrant declaration alleges.
While passing El Cielo Road, Torrez’s Ford F-150 rear-ended a Nissan Versa, then veered into a Nissan Sentra driven by Garcia. The Versa was sent into a curb and street sign after being struck, but its occupants were uninjured, according to Palm Springs police.
Investigators allege that Torrez had to be sedated and restrained as he was being transported to Desert Regional Medical Center for major injuries sustained in the crash.
He “yelled profanities at emergency personnel and he flailed his arms and attempted to free himself from restraints that were applied to him,” according to the declaration, which states that Torrez told a responding firefighter, “When I get done, I am going to (expletive) you up!”
He also allegedly yelled, “I better not get a (expletive) DUI!”
Torrez remains held in lieu of $1 million bail at the Cois M. Byrd Detention Center near Murrieta, according to county jail records. 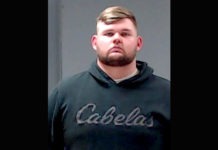 Contributed - September 2, 2020
On Monday, August 31, 2020, at 10:39 AM a carjacking at gunpoint was reported in the area of Avenue 78 and Fillmore Street, within the unincorporated area of Thermal.

Kyle Headlee - June 16, 2019
Hemet Sheriff’s joined the National Guard and many other police departments in Anza, CA., on the morning of June...