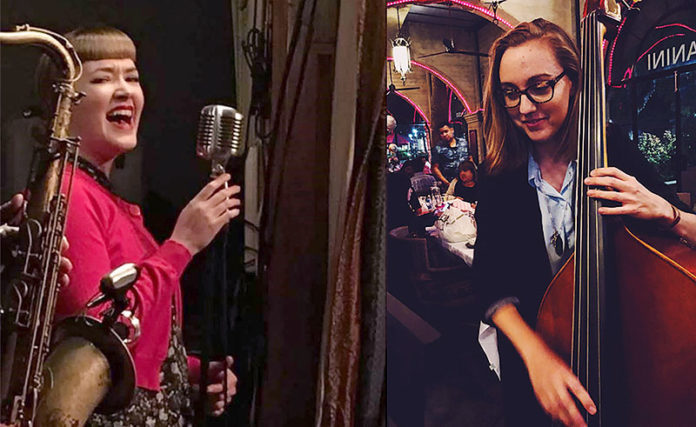 Dylann Asa and Lia Booth will perform Saturday, August 24th, 2019, at The Diamond Valley Arts Center, located at 123 N. Harvard St., Hemet, Ca 92543. Doors open at 7:30 pm with the show starting at 8:00 pm. Admission is $15 for Members and $20 for Non-Members. Student tickets are $5 for Pre-Sale and $10 at the door. As always, members can enter the coupon code online at checkout for your discount.

Join us for an evening with jazz vocalist Lia Booth and bassist Dylann Asa at Diamond Valley Arts Center on April 13th. They will be bringing an eclectic blend of old standards and new compositions with a talented ensemble of musicians. Bring friends and family out to join us for this special show.

Dylann Asa is a young bassist, arranger, and composer who performs regularly in Los Angeles, Inland Empire, and Palm Springs. She has had the great honor of studying upright bass with Darek Oles, Or Bareket, Rick Shaw and Marshall Hawkins. In 2018, Dylann was chosen as a featured artist in the Young Artist Showcase at the Washington Women in Jazz Festival in Washington, D.C.

Lia Booth is quickly establishing herself as one of Southern California’s most talked-about young jazz singers. She has been making a strong impression and building a solid fan base with her fun, dynamic, and heartfelt performances. Her daring yet effortless musical style is rooted deeply in the past but with a contemporary sensibility that breathes new life into classic jazz standards night after night.

Since 2010 Lia has been performing in popular jazz venues across Los Angeles, Orange and Riverside counties, working both with the area’s younger generation of “jazz lions” and with a host of veteran jazz musicians.

While actively leading her own groups, Lia is also a featured member of The Tony Guerrero Quintet and The Swingliners. She has just released a new album of standards in a duo setting with guitarist Will Brahm (available on all music platforms for purchase NOW!) and is currently in the planning stages for an upcoming big band album.

MUSIC AT THE CENTER is a fundraiser for The DVAC and its programs.  Beverages will be available for purchase. Guests have access to the current gallery exhibition as well as the concert.  Doors open at 7:30 pm with the concert begins at 8:00 pm.