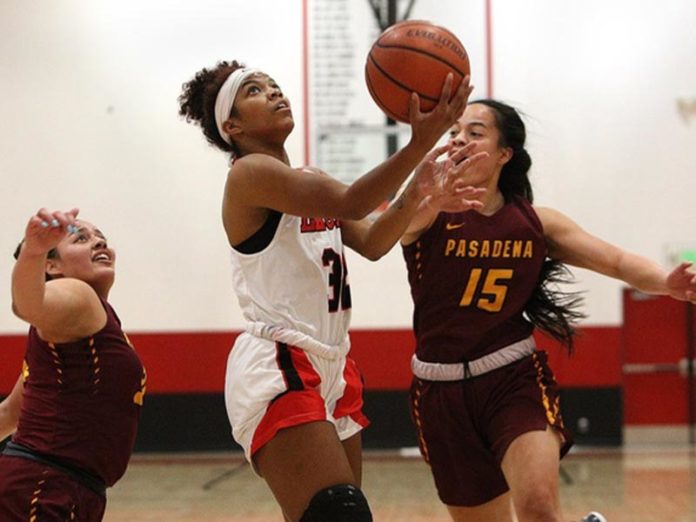 The Eagles led for nearly the entire game, but it was never a comfortable one as MSJC led 15-11 after the opening period and 27-22 at the half. Both teams struggled to find offensive rhythm in the game as neither team shot over 25% in the contest from the field. MSJC was able to connect on 6 of 19 three pointers. The Eagles did control the boards throughout the evening though as they out rebounded the Lancers 65-45 and hauled in 27 offensive rebounds. Pasadena made things very interesting in the closing minutes of the third quarter as they rallied to tie the score at 41 a piece at the end of three. The Lancers also scored the first two points of the fourth quarter to take their only lead of the game at 43-41, before the Eagles answered by out scoring them 17-4 the rest of the way.

First Team All-State and Inland Empire Athletic Conference Player of the Year Haylei Janssens scored a game high 18 points to lead the MSJC offense, she also grabbed 8 rebounds. Third Team All-State selection Deja Blue scored 16 as she recorded a double double. Blue also had a team high 10 rebounds in the win. De’Adra Ross added 7 rebounds and 3 blocked shots for the Eagles while Kiana Castello came off the bench to add 7 big points. Keiara Barton played a pivotal role for the MSJC defense as she spent the evening holding two time All-State forward Dariel Johnson of the Lancers to 6 points in the game.

The win advanced the Eagles to the State Sweet 16 and the Southern California Regional Final on Saturday March 7th when they travel to Mt. San Antonio. MSJC improved their record on the year to 27-2, Mt. SAC will enter Saturday’s contest with a season mark of 22-7, they were the regular season champions of the South Coast North Conference. The Eagles have reached at least the State Sweet 16 for five straight seasons.