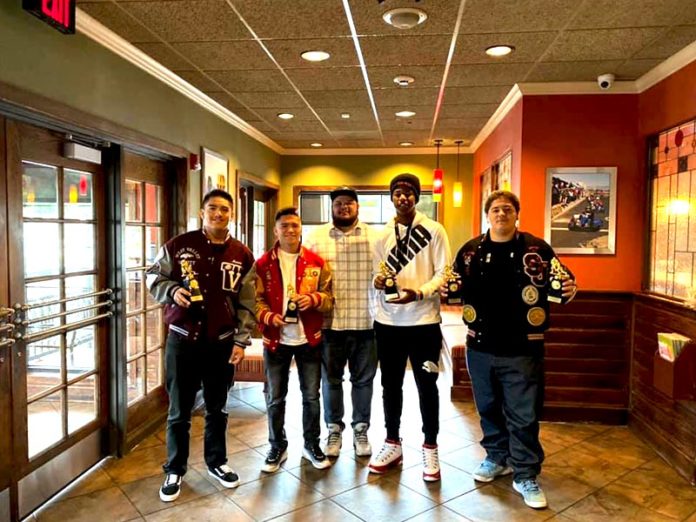 This season we made an “All-Valley Team” and we felt a few of these players deserved extra attention for their performances on the football season this year.

Asaiah Aguilar-Clutch Performance
We gave Asaiah Aguilar (Hemet High) the “Clutch Performance” award for his performance against Citrus Hill High School. Prior to this year, Aguilar never played football. Never.  This wasn’t because he didn’t want to, but due to the fact that his parents wanted him to be safe in order to prolong his soccer career.

Aguilar is a great student who gets very good grades, respects his parents, and honors his teachers. He was able to convince his mom to allow him to play this season, with the contingency that he could only play Kicker. She was reluctant at first, but grew to enjoy watching her son’s exploits on the football field. Aguilar proved to be a “go to” football player in a “do or die” situation against Citrus Hills in the Bulldog’s first league game of the year. With only a minute left in the game, Aguilar drilled a 35-yard field goal that gave the Bulldogs the lead and ultimately the win in the game. Aguilar will go down in Bulldog history as the kicker who gave the Bulldogs their first victory over Citrus Hills and handing Citrus Hills their first league loss in nine years.

Sheldon Newton-Game Changer
We gave Sheldon Newton (San Jacinto High School) the “Game Changer” award. The Game Changer award is pretty self-explanatory: it’s all about how much of an effect one player has on the game. Sheldon Newton is a different kind of animal and high schools around Southern California had no idea how to prepare for him. This could be due to Coach Cogdill (San Jacinto Defensive Coordinator) and Coach Galliano’s (San Jacinto Head Coach) creative ways of getting him involved all over the field. Newton was dominant every time his cleats touched the field. Coach Cogdill often rotated him around the defensive line, challenging him to play Defensive end, Defensive Tackle, and Nose Gaurd. Which really allowed the team to be creative with their linebackers and defensive backs. Sheldon Newton missed one game this season and you could definitely tell that the lack of his presence was felt. Not to mention Newton caught two passes this season both good for touchdowns.

Marcos Flores-Sportsman of the Year
Marcos Flores (West Valley High School) earned the “Sportsman of the year” Award because of his actions on the field. His senior season was full of adversity, with a brand new head coach at a school that hasn’t put together a true winning season in quite a few years. Flores always kept his composure and never gave up: he played every snap like it was his last, and at times he looked ready to die on that field. The final game of his high school career was cut short when a bench-clearing brawl took place between the two teams. In the midst of chaos, Marcos’ true character shined through as he took a knee and waited for the referees to separate the two teams. Unfortunately for Marcos, he wouldn’t be allowed to play the last six minutes of his final game. Marcos Flores is the epitome of what a Student-Athlete should strive to be and for that, he deserves this award.

Arturo Ojeda Jr-Lineman Award
Arturo Ojeda Jr (San Jacinto High School) has been a monster on the offensive line all year long. His nickname is “The Bodyguard”: he is a team captain at San Jacinto and he plays left tackle. The left tackle spot is one of the most important positions on the football field. They make sure that the offensive line is in check and working as a concise unit. Ojeda does a lot more than just protect his quarterback’s blindside. He helps him identify blitz packages and signals to the rest of his line who they should pick up. He plays with intense energy and prides himself when he gets a “pancake”. He is a proud member of the “Trench Gang” and was easily the most dominant lineman in the league this year. San Jacinto is going to have a tough time replacing him next year. Ojeda is leaving some huge shoes to fill.

Kajiya Hollowayne-Most Valuable Player
Our Most Valuable Player goes to Kajiya Hollowayne (San Jacinto High School). Hollowayne plays quarterback.  He already has multiple division 1 college offers including offers from UCLA, Nevada, and Kansas. Hollawayne is the definition of a dual-threat quarterback and can throw the deep ball or take it on the ground. Hollowayne finished the season with over 2,300 passing yards and 22 passing touchdowns. He also rushed for over 900 yards and added 13 touchdowns on the ground. At times it looked like Hollowayne was playing a video game while everyone else was stuck in real life. He is only going to be better in his senior year and it seems he has already put the league on notice. Get your popcorn ready, because next year will be quite a show.

We’d like to thank all of the winners, their families and the staff at Applebee’s for making our first Awards banquet an outstanding success.

Contributed - April 8, 2022
The Department of Veterans Affairs introduces new efforts to improve interagency coordination and expand outreach to criminal justice partners, to better help those reentering into society after incarceration.