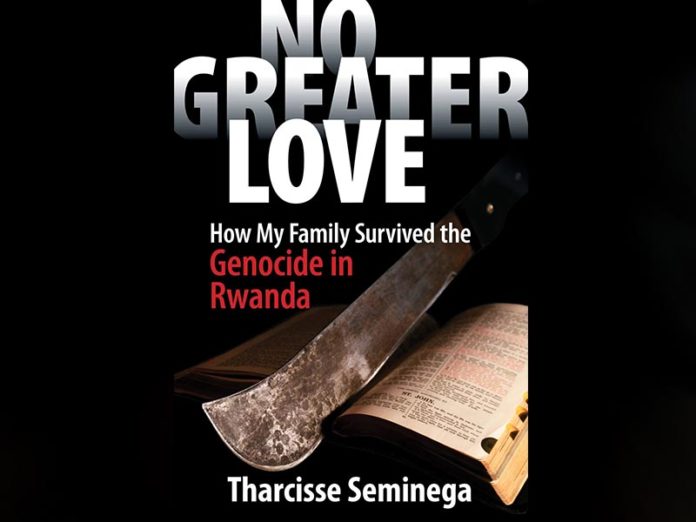 Religion in the World

Rwanda’s descent into terror in April 1994 took an estimated one million lives in a mere 100 days. The Genocide against the Tutsi in this overwhelmingly Christian country was horrifying for its intimacy: Killers and victims were neighbors, friends, fellow churchgoers, workmates, even spouses. Murderers carried crude implements—machetes, hoes, nail-studded clubs—and lists of those doomed to die.

Gatineau, Quebec—Tharcisse Seminega was marked for slaughter. With all escape routes seemingly cut off, he, his wife, and their five young children sat helplessly awaiting death.

Seminega, a Tutsi and former Catholic seminarian, taught at the National University in Butare. Extremist Hutu faculty orchestrated the murder of Tutsi professors and students. But just minutes before a Hutu professor arrived with soldiers at Seminega’s house, Hutu friends helped the family flee.

The new memoir No Greater Love—How My Family Survived the Genocide in Rwanda relates how, during the next 75 days, Seminega and his family evaded the machetes with the help of about 20 Hutu rescuers who took unthinkable risks to hide and sustain them. These rescuers knew that if the génocidaires caught them, they faced an agonizing death as traitors to the Hutu cause.

Most of the rescuers belonged to the Jehovah’s Witness community, of which Seminega was a part. His wife, a former nun, feared to join him, knowing that the Witnesses had long been oppressed for refusing to take up weapons or participate in politics.

Because of this apolitical teaching, writes genocide scholar Rhoda Howard-Hassmann, “Hutu Witnesses were impervious to calls for patriotic Hutu to take part in mass killings”; and yet “to do nothing was also against their Christian principles.”

Professor Seminega says that his family’s rescuers and other Witnesses followed Jesus’ “new commandment”—To love one another just as he loved them, even to the death. They sheltered not only fellow believers but others who knew that Witnesses would not harm or betray them.

Of 2,500 Witnesses in Rwanda in 1994, about 400 were murdered, Tutsi as well as Hutu who tried to rescue Tutsi or who refused to kill.

After the genocide, researchers documented widespread complicity among church leaders and members. States one study: “All the churches active in Rwanda, with the exception of the Jehovah’s Witnesses” were involved in the genocide.

Now, Professor Seminega speaks with classes via Skype about his family’s story. In paying tribute to his rescuers, Seminega says: “Their selfless acts move me every day to ask, how far will my love reach?”

Susan Beckett - January 1, 2021
Our traveling wings may be clipped a bit this year but it’s hard to keep Americans down when they get the travel bug! Pretty much on cue, the holidays found families packing up the kids, the dog, delicious foods, clothes, and gifts, as they visited friends and family.

The Devil Made Me Do It?

Susan Beckett - March 19, 2020
Few people can forget the day Princess Diana died. Every TV channel was working overtime with the news of her tragic death.