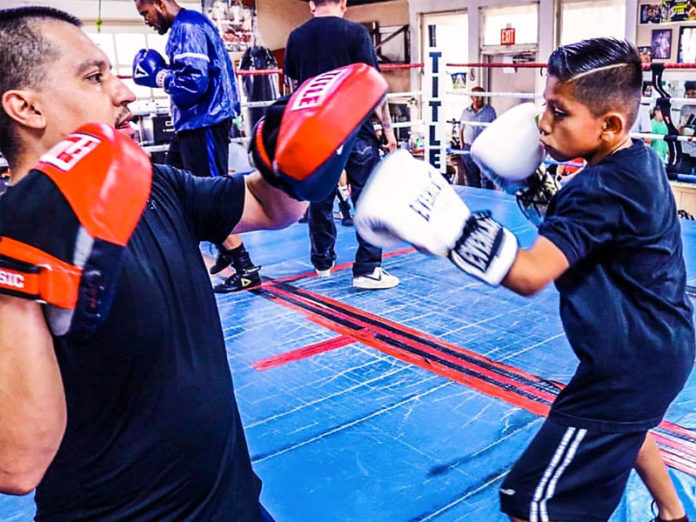 They Represent Hemet Across The Nation

They are known as “The Herrera Boys” all around the country. Adrian (5th grade) & Andrew (4th grade) attend Fruitvale elementary school. They both love to play basketball, soccer and ride their skateboards for fun, but that’s not why they are best known in town. They are famous amongst the boxing community. Both of them started boxing just two years ago, which when you put in perspective what they have accomplished as an amazing feat. Adrian is the number one ranked boxer in the country (9-10-year-old 60lb division) he is a four-time National Champion, So-Cal state champ, and a Junior Olympic Gold Medalist. His list of accolades is impressive, and he continues to dominate his competition.

His younger brother Andrew has his impressive resume. He is a Silver Gloves boxer, Jr Olympic Champ, and So-Cal state champ. Andrew is ranked number three in the nation in the 9-10-year-old 55-pound division. Andrew is adamant that he wants to be a professional boxer when he grows up, he already has a “There isn’t another option” mindset. The boys run three miles every day to stay in shape and keep their conditioning up. Other than that they spend two hours each day at Fight To Perfection boxing club in Riverside Ca.

The furthest they have traveled for a boxing competition in Missouri, but have an event coming up in Louisiana soon. Their parents are proud of what the boys have accomplished, but are very adamant that they have to finish High School and attend College before becoming professional boxers. Their father said this, “no matter what happens in your boxing career, boxing is only for a limited time, but your education will be with you for your whole life.”

Adrian and Andrew are proud of their Mexican heritage and want their names to go down in the record books along with other Mexican Boxing Legends like Julio Cesar Chavez, Juan Manuel Marquez, Oscar De La Hoya, and Canelo, However they both dream of representing the United States of America in the Olympics and win gold medals for their country.

Both boys are thankful to their parents for pushing them to be great and supporting everything they do. “Dad pushes us to keep working hard, he never lets us slack or not try hard, and Mom does everything from taking pictures, driving us to practice, and makes sure we are eating healthy so we can make weight,” said Andrew.

The Herrera Brothers represent Hemet & San Jacinto at every boxing tournament they attend. They have space on their trunks for sponsors to help them get to their fights; If you own a business and want to help these two young boys represent their city all around the nation you can sponsor them by reaching out to Herreraboys951@gmail.com

The Hemet and San Jacinto Chronicle applauds the Herrera Boys for all their accomplishments and is looking forward to covering more of their fights as they continue their careers.

Kyle Headlee - September 6, 2019
The Hemet & San Jacinto Chronicle is taking you to San Jacinto High School this week for the Game of the Week. This week San Jacinto High is welcoming Murrieta Mesa into "The Jungle" as the two teams look to show the rest of Southern California that they are serious contenders.