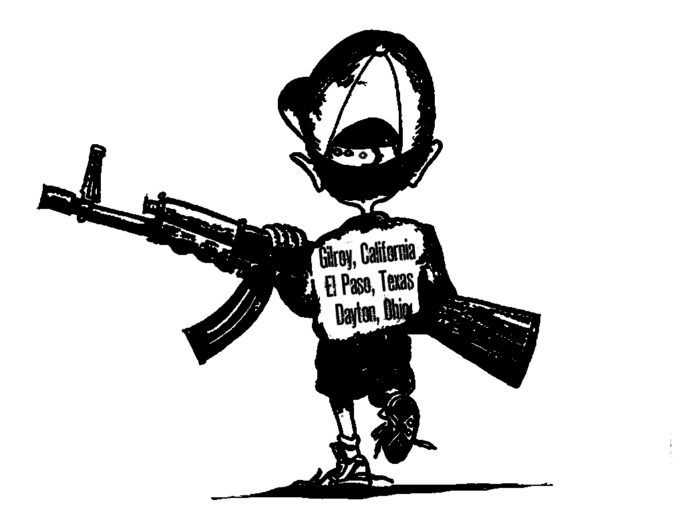 Is the United States of America the only country where mass indiscriminate shootings of human beings take place without apparent rhyme or reason?  Are we to be branded worldwide as a gun toting people willing to shoot our fellow citizens just because we can? Did the framers of the constitution imagen when they decreed that we have a right to bear arms that such mayhem would be wrought upon the citizenry.

Certainly, other countries that we read about experience mass killings of innocent people, such as suicide bombings in middle-eastern countries and multiple murders of bystanders in public places such as in a bar in Mexico recently.  The difference between these heinous and unjustifiable acts and the American experience is that they are carried out by fanatics in the name of what they rationalize as a superior cause or as an act of revenge or power maneuver on rival criminal groups.  In both cases, the perpetrators live by a misguided and twisted doctrine.

For the most part, mass killings in the United States are not the result of fanatics looking to carry out acts of violence as vindication of what may be perceived by them as a just cause, but rather by demented individuals who have been corrupted willingly or not by the American circumstance.  The ability to acquire a weapon of whatever caliber by most individuals, is not the only effect of this bloody phenomenon but rather and probably most importantly the cause is the environment in which the shooters have developed – a climate of violence in the home, in schools, the work place, the movies, and everywhere we look and go.  The killers at home don’t care who they shoot.

Taking corrective action of the scenario described above would require generations, and since waiting for the next mass shooting is not an option, in this day and age of information technology where every resident has a record somewhere, it seems reasonable that for the greater good, background checks should be performed on all persons manifesting their intention to buy a gun.

Doing background investigations would weed out not only people with criminal records but also all those individuals with a propensity for violence.  Additionally, approval from family members, neighbors and friends should be required for any individual acquiring a gun, they should know if a person is mentally stable or not.

Buying a firearm should not be easy, in lieu of outright prohibition like is the case in many countries, buying a weapon in the United States should require that the purchaser provides all pertinent information mandated by appropriate authorities and be investigated to the fullest.  Anything less, judging from past events, means that we will continue to stack up the bodies.

Rusty Strait - May 7, 2020
The 1980 presidential race, even with three major candidates, was a cakewalk for the former actor and Governor of California. Ronald Reagan was swept into the White House (garnering 489 electoral votes), with his "kitchen cabinet" in tow.

Older and disabled Americans are languishing for years on waiting lists...

Contributed - November 11, 2022
When President Biden signed the Inflation Reduction Act in late August, giving seniors a much-needed break on drug prices, one important provision in the legislation was left out.