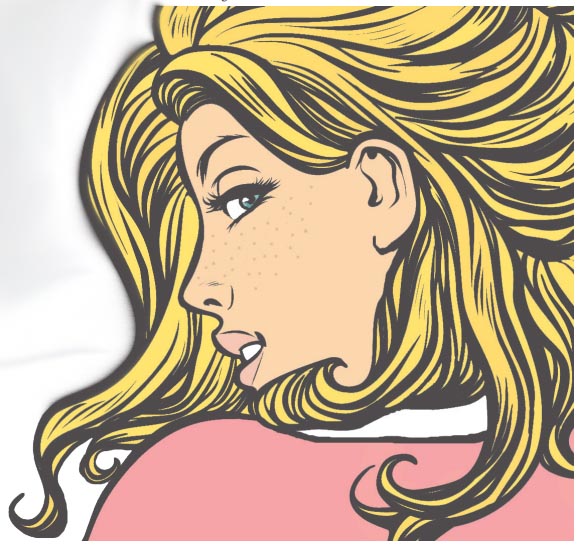 As a kid, girls were not usually on my radar, as a matter of fact, they were somewhere beyond the horizon.  However, when I was about twelve or thirteen a blonde-haired, blue-eyed neighbor caught my eye, and I suffered through my first case of being lovesick, and boy did I have it bad.  My relationships with female sex became a lot more complicated as an adult. Norma Westfall. In seventh grade, it began and went on for almost a year. The very mention of her name sent me into panicky tremors.  That I turned out to become bi-sexual would certainly have not been considered in the minds of most folks in my life at that time. All I thought of was Norma Westfall. She had a pert pug-nose, and angels had sculpted light freckles on a face I was sure.  Her medium blonde curly hair must have been grown by the seraphs who manufactured corn silks. Oh yes, I was love-sick from the floor to the sky and beyond.

Never the daredevil, when it came to Norma Westfall I was melting putty in boiling water.  I overheard my mother talking to a neighbor one day, “I’ve never seen him like this.  Mooning around all afternoon instead of getting out of the house and doing something with his buddies.”

“Oh, Jerry, I wouldn’t worry.  He’s at that age.  Don’t you remember how boys were in their early teens?  We could wrap them around our little fingers.” “Yeah,” mom said, “but he had always given me the impression that when he got into puberty, I’d have to deal with a boyfriend, not a girl.” “C’ mon, Jerry, during their early and mid-teens they don’t know what they want.   For a long time, I thought my youngest brother would go that way. It was always boys, boys, boys, and then one day at the supper table he announced that he was engaged and wanted dad to sign permission for him to get a marriage license. Dad said, absolutely not. Two years later mom signed for him and he took a bride at 17. What’s more, it wasn’t the girl he couldn’t live without.  I wouldn’t worry. “
Needless to say, in the long run, my mother knew me better.

So I hungered and yearned for Norma Westfall and, when she went to visit an aunt in Bel Air, Ohio for a month during summer vacation, I moped around the house like a limp dishrag.  Even two weeks on the farm didn’t help.
Although Bel Air was maybe 90 to 100 miles upstate on the Ohio  River, it might as well have been Saudi Arabia.  I thought about hitch-hiking, but then what would I say when I got there?  Where would I bunk down? In August, a week before school started, Norma Westfall was coming into the Charleston Greyhound Station, where my mother worked.  I wanted to be there, but I didn’t care to be seen making a fool of myself (and I was sure I would do that). However, in my life, there have always been a however. My cousin Bill, the instigator, went with me. “What you got to do, Raymond is a run-up to her when she gets off the bus and plants a big wet kiss on her face, and she’ll know that anybody who would do that in public must mean it.”

“No way I’m gonna do anything like that.   Ain’t gonna happen.”
There wasn’t any way on earth I would do anything so stupid, much less in front of God and the passengers getting off the bus from Bel Air, Ohio.
No way?  No way! The bus docked into a slot, and I saw her profile two windows back from the opening door.  Everything started to grow hazy, and that’s the last thing I remember until she slapped me so hard that I fell smack on my butt on the platform.
I got the gory details from my mother after she came home from work.  Apparently, at the last minute without thought aforehand, I did exactly what I said I would never do.  Grabbed her as she put her foot on the ground and, I don’t know how wet it was, but my kiss was planted squarely on her astonished mouth.   Her reaction was as though a mugger had tried to kiss her in the park.

That was my one and only surprise kissing of anybody.  Also, it was the end of my passionate feelings for Norma Westfall.  How could anybody who liked me be so cruel?