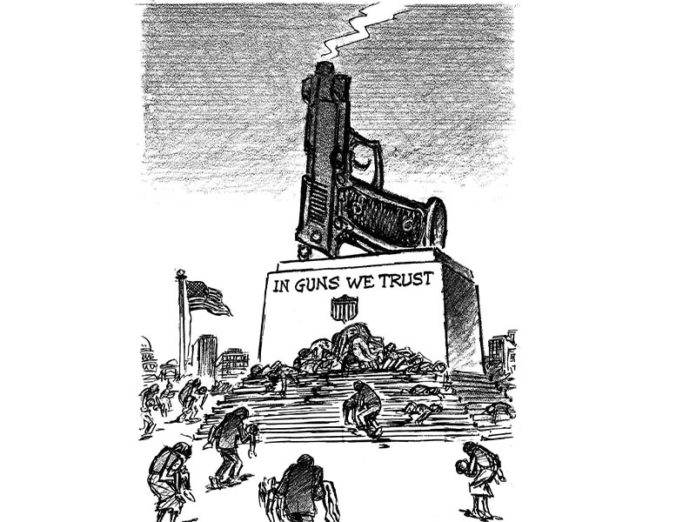 The HSJ Chronicle welcomes opinions from its readers.  We like difference of opinion based on facts, beliefs and reality.  We promise to edit your opinion pieces based solely on spacial constraints. While we have allowed the following piece of polemic, we ask that, in the future, your contributions steer clear of any attacks on persons or organizations, and that any facts and figures be backed by citations whenever possible.

Since its founding in 1871, the National Rifle Association, who in December 2018, claimed a membership of 5 million, has lobbied against gun legislation.

The NRA has suggested, most recently after the Stoneman Douglas High School and the Sandy Hook Elementary School shootings, that armed security guards be added to schools.

Some observers and lawmakers see the NRA as one of the most influential lobbying groups in Washington. Over its history the organization has influenced legislation, participated in or initiated lawsuits, and endorsed or opposed various candidates at local, state and federal levels.

Prior to the l970s, the NRA was nonpartisan. During the l970s, it became increasingly aligned with the Republican Party. After 1977, the organization expanded its membership heavily on political issues and forming coalitions with conservative politicians. Most of these are Republicans.

In 1994, the NRA unsuccessfully opposed the Federal Assault Weapons Ban (AWB), but successfully lobbied for the ban’s 2004 expiration.

The NRA has been described as influential in shaping American gun control policy by influencing legislators’ voting behavior through its financial resources and ability to mobilize its large membership. The organization has not lost a major battle over gun control legislation since the 1994 Federal Assault Weapons Ban. At the federal level, the NRA successfully lobbied Congress in the mid-1990s to effectively halt governments-sponsored research into the public health effects of firearms, and to ensure the passage of legislation in 2005 largely immunizing gun manufacturers and dealers from lawsuits. At the same time, the NRA stopped efforts at the federal level to increase regulation of firearms. At the state and local level, the NRA successfully campaigned to deregulate guns, for example by pushing state governments to eliminate the ability of local governments to regulate guns and removing restrictions on guns in public places (such as bars and campuses).

By 1976, as the NRA became more politically-oriented, the Political Victory Fund (NRA-PVF), was established as a subsidiary to the NRA, to support NRA-friendly politicians. Through the NRA-PVF, the NRA began to rate political candidates on their positions on gun rights. An NRA “A+” candidate is one who has “not only an excellent voting record on all critical NRA issues, but who has also made a vigorous effort to promote and defend the Second Amendment”, whereas an NRA “F” candidate is deemed a “true enemy of gun owners’ rights”.

A 2017 poll conducted by the political action committee Americans for Responsible Solutions, which supports gun control, exclusively questioned 661 gun owners. 26% of the respondents stated they were a member of the NRA. The ARS reported that less than 50% of gun owners polled believed that NRA represented their interests, while 68% of them somewhat or strongly agreed with the statement that it had been “overtaken by lobbyists and the interests of gun manufacturers and lost its original purpose and mission.” Recent polling trends show a significant decline in NRA favorability.  (Editor’s note: Per many sites, among them https://www.ammoland.com/2018/07/dont-believe-fake-polls-about-the-gun-control-views-of-nra-members/#axzz65n55xJ9i, the NRA membership list is a closed list, so pollsters never really know if they are even actually talking to NRA members or not).

After the October 2017 Las Vegas shooting that left 58 people dead and 851 injured, the NRA was initially criticized for their silence. After four days they issued a statement opposing additional gun control laws, which they said would not stop further attacks, and calling for a federal law allowing people who have a concealed carry permit in one state to carry concealed weapons in all other states. The organization also suggested additional regulations on so-called “bump stocks,” which allow a semi-automatic weapon to function like a machine gun; the Las Vegas shooter had used such a device.

Such influence in the political process of this country, supported by unlimited financial resources, has converted the NRA into a nefarious organization working only to protect gun manufacturers and their own political interests.