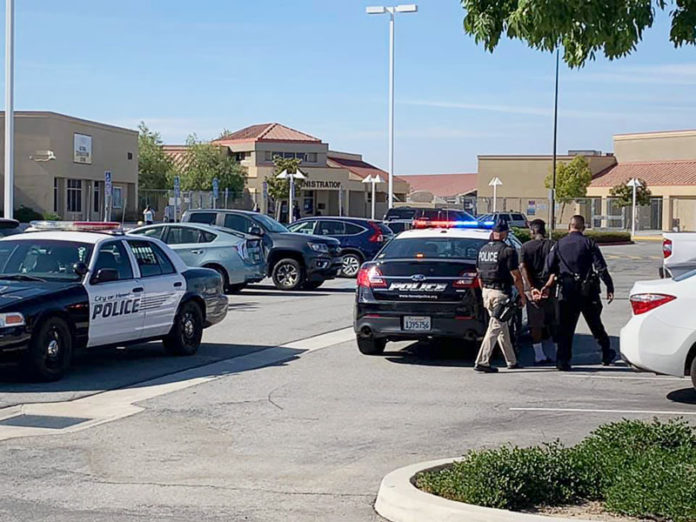 HEMET — Four students were arrested, and one required medical treatment after a near-riot broke out at Rancho Viejo Middle School Friday afternoon, Aug. 23, according to Hemet PD officials. The students arrested, who range in age from 13 to 15-years-old, now face charges including felony assault on a police officer, resisting arrest, inciting a riot, participating in a riot, and multiple other charges.

According to officials, yesterday’s violent incident began shortly before 4 p.m., when a 15-year-old Tahquitz High School student walked onto the campus of Rancho Viejo Middle School and became involved in an argument with a school employee, Hemet Police Lt. Eric Dickson said after the arrests.

After a school resource officer arrested the teen for causing the disturbance, several other students became involved and allegedly attacked the officer – causing him to issue an emergency radio broadcast for help.

Although Dickson did not specify the nature of the initial confrontation or why the high school student had gone to the middle school, Dickson explained, “The Tahquitz student threatened to harm the employee, and the school resource officer was called.”

When the school resource officer arrived and attempted to make contact the Tahquitz student who was causing the disturbance, she refused to speak with him and attempted to leave the campus, according to Dickson.

Based on information gathered from the school staff, the officer arrested the girl for making threats against a public employee.

As the officer was walking the teen to his vehicle, a crowd of students began to form around them and became aggressive with the officer; demanding that he release the arrested girl.

“As the officer attempted to place the student into his vehicle, one of the surrounding students blocked the car door from closing, and another student moved in closer to the officer,” Dickson continued.

As the situation escalated, one of the students allegedly attacked and then began trying to punch the arresting officer, at which time he put out an emergency radio broadcast that he was under attack and he requested priority assistance.

While the officer pushed back against the aggressive students and fended off the 13-year-old male student who was physically attacking him, officers who heard his radio call for help converged onto the middle school campus from around the city.

“Ultimately, with the assistance of school staff and additional officers, the crowd was dispersed, and three more students were arrested,” Dickson continued. “Thankfully, neither the officer nor any of the students were injured.”

Although nobody was injured during the melee, medical aid was requested to the campus to treat one of the students “for a preexisting condition,” according to Dickson.

All four of the arrested students were transported to Riverside County Juvenile Hall where they were booked on a variety of charges related to the incident. None of the student’s names were released due to their ages.

Possession of Stolen Vehicle and Methamphetamine

Contributed - December 24, 2020
On December 22, 2020 about 6:30 A.M. Riverside County Sheriff’s deputies assigned to the Jurupa Valley Station attempted to conduct an enforcement stop of a stolen vehicle in the area of Sumner Avenue and Limonite Avenue, in the city of Eastvale. The driver and front passenger exited the vehicle and fled on foot.

Lewd and Lascivious Acts with a Child

Contributed - November 16, 2020
On Thursday, October 1, 2020, deputies assigned to the Lake Elsinore Sheriff’s Station responded to a call for service involving a lewd act on a child that occurred at a residence located in the 18000 Block of Tereticones Avenue, Lake Elsinore.