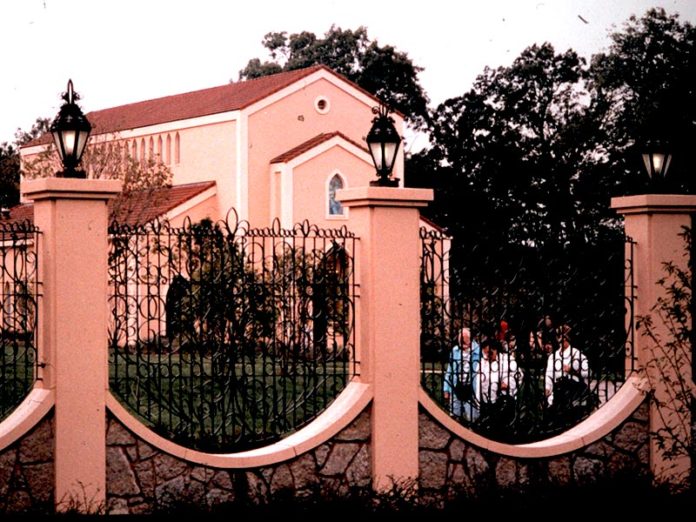 My husband Lloyd and I enjoyed a fully escorted twelve-day motor-coach excursion to Eureka Springs, Arkansas; Branson, Missouri; and The Precious Moments Chapel in Carthage, Missouri; among other interesting places.

In EUREKA SPRINGS, we took a narrated tour on an open-air tram, admiring the beautiful authentically restored Victorian homes and gingerbread cottages, lining the narrow and twisting roads. Nestled among the foothills of Arkansas, the entire city is on the National Register of Historic Places On the grounds of The Great Passion Play, depicting the final week and climax of Christ’s walk on earth, is the seven-story Christ of the Ozarks statue, the second largest statue of Christ in the world.

In BRANSON, we enjoyed the Showboat Branson Belle, on Table Rock Lake; Dolly Parton’s Dixie Stampede dinner theatre and show; the Lawrence Welk Show, at the Champagne Theater; the Bobby Vinton Show, with the Glenn Miller Orchestra; the Shoji Tabuchi Show (the number one show in Branson); the Mel Tillis show; the Mickey Gilley Show; and the Jennifer Show.

The PRECIOUS MOMENTS CHAPEL was a stunning sight, that wasinspired by the Sistine Chapel in Rome, and located near Carthage, Missouri, in the scenic Ozarks of Southwest Missouri. Samuel L. Butcher had a dream. It was to share the message of God’s love with the World, and as gratitude for God’s blessings in his life. A struggling, young artist, Samuel created his first Precious Moments drawing in 1974, and the next year, Precious Moments was introduced to the public. “It is my prayer,” the artist said, “that through my work in the Chapel, I might share my faith with others, and that the Spirit of God might touch the visitors’ hearts, and bring them to the saving knowledge of Jesus Christ, our Lord.”

Now a renowned artist, he prayed in1984, for the Lord to lead him to a new home, where he could create a masterpiece for the Lord. This brought Samuel to Carthage, where a house overlooking Center Creek near Carthage, was to be his future home. He fulfilled his lifelong dream, of reaching out to people with a message of God’s love, the Precious Moments Chapel.

Samuel called his well-known figurine collectibles, thebulb-headed, child-like figurines with teardrop eyes, “Precious Moments. Many of them, looking like baby angels with wings, were cast as angels, Biblical prophets, or figures from the parables of Jesus.

Samuel earned a scholarship to the College of Arts and Crafts in Berkeley. Now is a multi-millionaire, he surrounded his Chapel with acres of parklike land, a museum, a convention center featuring live musical acts, and more.

We saw the large mural called “Hallelujah Square,” his crowning work. Baby angels held “Welcome to our Heavenly Home” signs, as a deceased child arrived in Heaven. In the center of the mural is Christ, the only adult shown in the Chapel. The wonderful artwork, and collection of Samuel J. Butcher, is cherished throughout the world, and these photos of mine show some of the artwork we saw in the Chapel, which opened in 1989to reach out to people with a message of God’s love.

Lloyd and I delighted in the manicured grounds and gardens, featuring flowering plants of numerous stunning varieties, with each season having its own beauty. Along the Avenue of Angels, sunlight and shadows created an area of quiet.

The Fountain of Angels is an engineering masterpiece, with old world craftsmanship meeting state-of-the-art technology. There are about 252 four-foot-high carved bronze angels, and animal sculptures, gracing the fountain, some of them weighing as much as 1,000 pounds each. We saw dozens of geysers and water jets, designed by the world’s leading fountain experts. The central water jet shoots tens of thousands of gallons of water almost 100 feet in the air. The water used in a performance is held in a 100,000-gallon underground reservoir, being recycled throughout the show. It was interesting to learn that during peak formations, 16,000 gallons of water are pumped through the fountain per minute, equivalent to a standard sized swimming pool.

The beautiful Wedding Island, where visitors can get married, features a turn-of-the-century church and a Victorian mansion. However, in 2007, there was a termination of some of the attractions, including the Wedding Island,” along with the “Fountain of Angels.” Fortunately, the Precious Moments Chapel is still there.

Samuel’s personal tombstone stands outside the charming chapel, engraved “I trust that when I’m gone, our visitors may find great comfort in the work of art that I have left behind.”

Samuel has spent the majority of the 21st century living in Southeast Asia, and he opened a boutique resort in the Philippines, even including a smaller Precious Moments Chapel there.

His Precious Moments Chapel, a theme park located at 4321 Chapel Road in Carthage Missouri, is an imaginative work of art with love, hopefulness, a special sanctuary of peace and inspiration. The Chapel is Samuel L. Butcher’s way of Thanksgiving to the Lord, and which has become a 20th century masterpiece.

After enjoying an excellent buffet luncheon in Tiffany’s Restaurant, in an exquisite setting, with lovely window etchings, we continued our journey, on to our next adventure.