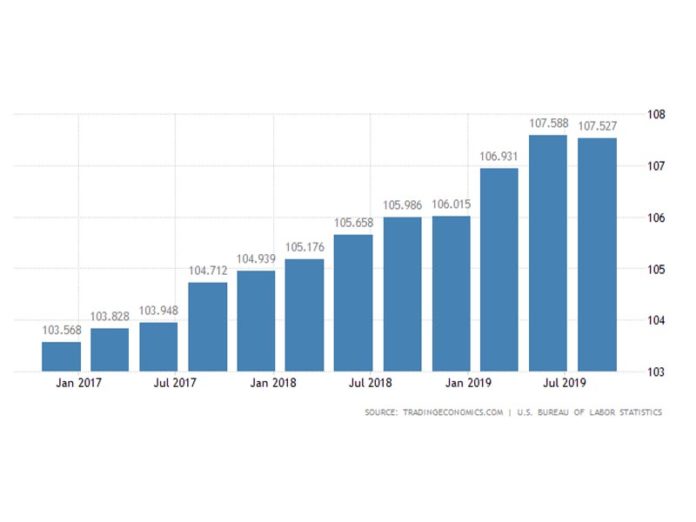 Trucking.  It seems that is what the economy is doing when you look at job growth: trucking along nicely.  In November stocks surged by 266,000.  Wall Street was blown away after they voiced expectations of 187,000.  This was enough to push down the unemployment rate to 3.6% from 3.5%.  This was a low touched earlier in the year and also the lowest jobless rate since 1969.  This was a one-eighty-degree-turn-around from the ADP private payroll report where expectations were not met and received a huge miss at only 67,000 instead of 254,000.

This week, the US productivity was also released.  This is a measure in the key ingredient to a rising standard of living, results in higher pay, more profits and low inflation.  Forecasts were predicting a 0.3 percent decline.  Reported labor productivity in the U.S. non-farm business sector fell an annualized 0.2 percent during the third quarter.  This followed an unrevised 2.5 percent growth in the previous three-months.  It was the first decline in productivity since the fourth quarter of 2015.  This measure is the result of output that went up by 2.3 percent and hours worked advancing faster at 2.5 percent.  A silver lining in this is that manufacturing sector labor productivity gained by 0.1 percent due to a 0.7 percent gain in durable manufacturing productivity.

Easing productivity costs has a relaxing affect on profit margins for corporations.  Recently corporate profits have been reduced by strong labor cost growth that has outpaced revenue.  Despite sluggish worker productivity it is implied that the pace of growth in labor costs is likely to remain strong.  Why?  As slower productivity growth and steady compensation growth occurs, it applies pressure on unit labor costs.  Remember this went up earlier this year.

What this adds up to ultimately is the big number, Gross Domestic Product (GDP).  Light productivity suggests the economy is unlikely to achieve the goal of 3% annual growth.  Sloth-like productivity has been blamed on a range of factors including a shortage of workers and low capital expenditure.

As you can see, we are in a tug of war between declining economic indicators and Federal Reserve stimulus of lowering interest rates that accelerate an economy.  As payrolls go up, companies will struggle to retain high productivity and profit margins.  Right now, Fed Chairman Powell is dovish on lowering rates any further and is in a “wait and see” position.  If declines continue, we expect rates will need to be reduced further in 2020.

If you have questions on a particular company or investment and would like our feedback, contact us at my email below.  Our team will research and respond to you with our recommendation and opinion.