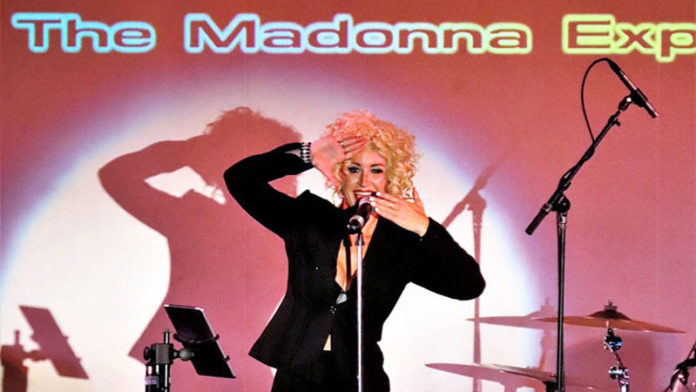 On Saturday, August 31st, the Historic Hemet Theatre kicked off Season Three of the Tribute Mania Concert Series with a high-energy Tribute to Madonna featuring the LA-based band BLONDE AMBITION.

Erin Stone was stunning in her leather bustier and fishnet shirt, twirling and dancing across the stage. Fans in the audience cheered at the top of their lungs from the first notes of “Dress You Up” to the last notes of “Like a Prayer.” Dozens filled the dance floor, some just for a closer look at the blonde bombshell with the angelic voice.

After the show, the verdict was unanimous – the crowd and the band had a great time sharing the iconic music of the Queen of Pop.

Meanwhile, tickets for the next three shows are selling fast. Tributes to The Beach Boys (9/14), Brooks & Dunn (9/20), and The Eagles are likely to be the next sold-out performances at Hemet’s vintage movie house.

Show tickets $22 presale / $25 day of show. Showtime is 7:00 pm, with doors open at 6:15 pm.  Information on all theatre events is available at www.HistoricHemetTheatre.com

Susan Carrier - October 17, 2019
"Best concert EVER!" is a phrase that is often heard following a performance at the Historic Hemet Theatre. And Saturday, October 12th was no exception